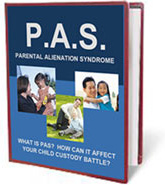 PAS---sometimes called Parental Alienation (PA)--- is a disorder that arises primarily in the context of child-custody disputes.

Its primary manifestation is the child's campaign of denigration against a parent, a campaign that has no justification.

It results primarily from the programming (brainwashing) of a child by one of the parents, whose goal is the complete vilification of the other parent.