Only the educated are free.
Epictetus
Advanced search 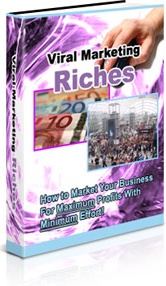 If you're sick and tired of doing all the marketing and advertising on your own...

"Discover How YOU Can Make MAXIMUM Profits With minimum Effort By Getting Other People To Willingly Market For You!"

Unlock The Secrets To Getting Other People To Talk About You And Your Business Willingly Whether They're Paid To Do It Or Not!


I'm not a mind reader, but my sneaky suspicion is that your answer is none other than YES. By now (and from the looks of this letter), you've definitely hazard a correct guess that in order for you to achieve maximum profits with minimum marketing effort on your part, you need to tap into Viral Marketing.

As the name itself is self-implied, you'll do more than well to leverage on Viral Marketing to have the word spread out about your product or service online. And what rewards can Viral Marketing bring you? Perhaps the same rewards it brought for Houston of Natural Science (HMNS).

The Houston Museum of Natural Science (HMNS) was one chosen to showcase the world-famous Exhibition for the Lord of the Rings Trilogy. HMNS quickly realized that while the exhibit was expected to generate a great deal of interest, it didn't have a lot of appeal for their core audience. The success of the exhibition, therefore, would rest in how it was marketed.

The Houston Museum of Natural Science quickly called in Spur Digital to help reach the targeted demographic audience and generate interest in the Exhibit. HMNS was, also, hoping to acquire new patrons and members to further their future revenue.

Spur digital worked with HMNS to identify the target market for the campaign and developed an integrated online media plan to reach those audiences. The campaign featured an online contest that was marketed through targeted online media outlets including relevant Web sites, Search Engines and third party E-mail lists. Viral marketing was an important component of the campaign, so Spur developed an innovative strategy to get people to refer their friends.

Spur identified the target audience as males 18 to 34 years old who were fans of action and fantasy films, frequent video game players and movie renters, tech-savvy who generally didn't hang out at museums. Based on this information, Spur chose search engine advertisements that would accompany specific search words, dedicated e-mail advertisements, sponsored e-mail advertisements, banner ads on web sites targeted toward the desired audience, and e-mails to the HMNS list.

Did it work? You bet! The results were excellent. The impact of the viral marketing effort was astounding - over 23% of registrants came originated from the Tell-A-Friend feature. The direct marketing efforts yielded impressive results as well. In total, the 12 week, locally-targeted online campaign yielded more than 2 million targeted impressions, 40,000 unique visits, almost 12,000 and 6,000 invitations sent by friends at a cost per action of less than $3.00. These contributed to the record attendance of almost 100,000 over 3 months.

Inspiring story, isn't it? It's even better since it's real. Imagine, how many sales and targeted prospects can you reach if you can take advantage of online Viral Marketing in your favor? And how can achieve your own astounding success online?

Look no further than my powerful manual that can show you how to tap into one of the most potent marketing leverages on the Internet!

Discover how you can market your business for MAXIMUM profits with minimum effort on your part. All you really need is some inspirations and concepts - and they're found in this power-packed manual!

In This Manual, Discover:

What is Viral Marketing?