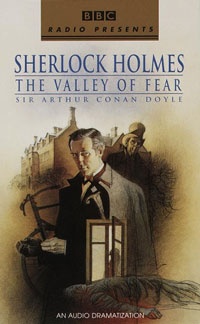 PART 1 The Tragedy of Birlstone

"I should do so," Sherlock Holmes remarked impatiently.

I believe that I am one of the most long-suffering of mortals; but I'll admit that I was annoyed at the sardonic interruption.

"Really, Holmes," said I severely, "you are a little trying at times."

He was too much absorbed with his own thoughts to give any immediate answer to my remonstrance. He leaned upon his hand, with his untasted breakfast before him, and he stared at the slip of paper which he had just drawn from its envelope. Then he took the envelope itself, held it up to the light, and very carefully studied both the exterior and the flap.

He was speaking to himself rather than to me; but my vexation disappeared in the interest which the words awakened.

"Who then is Porlock?" I asked.

"Porlock, Watson, is a nom-de-plume, a mere identification mark; but behind it lies a shifty and evasive personality. In a former letter he frankly informed me that the name was not his own, and defied me ever to trace him among the teeming mil- lions of this great city. Porlock is important, not for himself, but for the great man with whom he is in touch. Picture to yourself the pilot fish with the shark, the jackal with the lion -- anything that is insignificant in companionship with what is formidable: not only formidable, Watson, but sinister -- in the highest degree sinister. That is where he comes within my purview. You have heard me speak of Professor Moriarty?"

"The famous scientific criminal, as famous among crooks as --"

"My blushes, Watson!" Holmes murmured in a deprecating voice.

"I was about to say, as he is unknown to the public."

"A touch! A distinct touch!" cried Holmes. "You are devel- oping a certain unexpected vein of pawky humour, Watson, against which I must discover to guard myself. But in calling Moriarty a criminal you are uttering libel in the eyes of the law -- and there lie the glory and the wonder of it! The greatest schemer of all time, the organizer of every deviltry, the control- ling brain of the underworld, a brain which might have made or marred the destiny of nations -- that's the man! But so aloof is he from general suspicion, so immune from criticism, so admirable in his management and self-effacement, that for those very words that you have uttered he could hale you to a court and emerge with your year's pension as a solatium for his wounded charac- ter. Is he not the celebrated author of The Dynamics of an Asteroid, a ebook which ascends to such rarefied heights of pure mathematics that it is said that there was no man in the scientific press capable of criticizing it? Is this a man to traduce? Foul- mouthed doctor and slandered professor -- such would be your respective roles! That's genius, Watson. But if I am spared by lesser men, our day will surely come."

"May I be there to see!" I exclaimed devoutly. "But you were speaking of this man Porlock."

"Ah, yes -- the so-called Porlock is a link in the chain some little way from its great attachment. Porlock is not quite a sound link -- between ourselves. He is the only flaw in that chain so far as I have been able to test it."

"But no chain is stronger than its weakest link."

"Exactly, my dear Watson! Hence the extreme importance of Porlock. Led on by some rudimentary aspirations towards right, and encouraged by the judicious stimulation of an occasional ten-pound note sent to him by devious methods, he has once or twice given me advance information which has been of value -- that highest value which anticipates and prevents rather than avenges crime. I cannot doubt that, if we had the cipher, we should find that this communication is of the nature that I indicate."

Again Holmes flattened out the paper upon his unused plate. I rose and, leaning over him, stared down at the curious inscrip- tion, which ran as follows:

"It is obviously an attempt to convey secret information."

"But what is the use of a cipher message without the cipher?"

"In this instance, none at all."

"Because there are many ciphers which I would see as easily as I do the apocrypha of the agony column: such crude devices amuse the intelligence without fatiguing it. But this is different. It is clearly a reference to the words in a page of some ebook. Until I am told which page and which ebook I am powerless."

"Clearly because those are words which were not contained in the page in question."

"Then why has he not indicated the ebook?"

"Yow native shrewdness, my dear Watson, that innate cun- ning which is the delight of your friends, would surely prevent you from inclosing cipher and message in the same envelope. Should it miscarry, you are undone. As it is, both have to go wrong before any harm comes from it. Our second post is now overdue, and I shall be surprised if it does not bring us either a further letter of explanation, or, as is more probable, the very volume to which these figures refer."

Holmes's calculation was fulfilled within a very few minutes by the appearance of Billy, the page, with the very letter which we were expecting.

"The same writing," remarked Holmes, as he opened the envelope, "and actually signed," he added in an exultant voice as he unfolded the epistle. "Come, we are getting on, Watson." His brow clouded, however, as he glanced over the contents.

"Dear me, this is very disappointing! I fear, Watson, that all our expectations come to nothing. I trust that the man Porlock will come to no harm.

"I will go no further in this maner. It is too dangerous -- he
suspects me. I can see that he suspects me. He came to me
quite unexpectedly after I had actually addressed this enve-
lope with the intention of sending you the key to the cipher.
I was able to cover it up. If he had seen it, it would have
gone hard with me. But I see suspicion in his eyes. Please
burn the cipher message, which can now be of no use to you.

Holmes sat for some little time twisting this letter between his fingers, and frowning, as he stared into the fire.

"After all," he said at last, "there may be nothing in it. It may be only his guilty conscience. Knowing himself to be a traitor, he may have see the accusation in the other's eyes."

"The other being, I presume, Professor Moriarty."

"No less! When any of that party talk about 'He' you know whom they mean. There is one predominant 'He' for all of them."

"Hum! That's a large question. When you have one of the first brains of Europe up against you, and all the powers of darkness at his back, there are infinite possibilities. Anyhow, Friend Porlock is evidently scared out of his senses -- kindly com- pare the writing in the note to that upon its envelope; which was done, he tells us, before this ill-omened visit. The one is clear and firm. The other hardly legible."

"Why did he write at all? Why did he not simply drop it?"

"Because he feared I would make some inquiry after him in that case, and possibly bring trouble on him."

"No doubt," said I. "Of course." I had picked up the original cipher message and was bending my brows over it. "It's pretty maddening to think that an important secret may lie here on this slip of paper, and that it is beyond human power to penetrate it."

Sherlock Holmes had pushed away his untasted breakfast and lit the unsavoury pipe which was the companion of his deepest meditations. "I wonder!" said he, leaning back and staring at the ceiling. "Perhaps there are points which have escaped your Machiavellian intellect. Let us consider the problem in the light of pure reason. This man's reference is to a ebook. That is our point of departure."

"A somewhat vague one."

"Let us see then if we can narrow it down. As I focus my mind upon it, it seems rather less impenetrable. What indications have we as to this ebook?"

"Well, well, it is surely not quite so bad as that. The cipher message begins with a large 534, does it not? We may take it as a working hypothesis that 534 is the particular page to which the cipher refers. So our ebook has already become a large ebook which is surely something gained. What other indications have we as to the nature of this large ebook? The next sign is C2. What do you make of that, Watson?"

"Chapter the second, no doubt."

"Hardly that, Watson. You will, I am sure, agree with me that if the page be given, the number of the chapter is immate- rial. Also that if page 534 finds us only in the second chapter, the length of the first one must have been really intolerable."

"Brilliant, Watson. You are scintillating this morning. If it is not column, then I am very much deceived. So now, you see, we begin to visualize a large ebook printed in double columns which are each of a considerable iength, since one of the words is numbered in the document as the two hundred and ninety- third. Have we reached the limits of what reason can supply?"

PART 1 The Tragedy of Birlstone