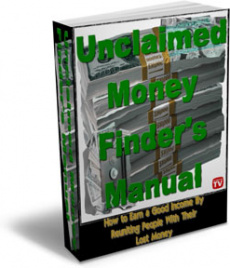 Would You Like To Take A Ride On The Next Money Making Rising Star?

Would You Like To Discover How to Service This Market?

Every year billions of dollars in unclaimed money and property is turned over to the State by companies who cannot locate the owners. Unclaimed money and property in the form of bank saving accounts, safety deposit vaults, deposit certificates, estates owned, money orders that were not cashed, insurance policies that are terminated or matured, term deposits, non refunded utility deposits and many other sources. Companies cannot hold on to money owed to another indefinitely. When the company cannot find the property owner, the money must be handed over to the State. State laws require the remittance of unclaimed money, from:

The Easiest, Most Hassle-Free Way to Make Money!

Many States Unclaimed Property Divisions are understaffed and cannot update regularly. A few governmental agencies acting as custodians for individual's and business's unclaimed money have no incentive, in general, to make it easy for the billions of dollars to be found and thus claimed. It has come to our attention that the authorities of a few states do very little to contact the rightful owners of unclaimed money. Moreover, other states have enacted legislation that enables the state to compensate budgetary deficits by using some of these funds. These problem was compounded by loopholes in state laws and red-tapism. In other words, little is being done to notify the rightful owners that they are entitled to unclaimed money.

This is where the opportunity for you to earn $200 or more an hour presents itself. The majority of unclaimed money owners do not know they have unclaimed money available to them. The small number that are aware or believe that they are entittled, do not know how to search for and claim their lost assets. As a Money Finder, you assist these individual locate their missing assets and collect a commission for doing so. You only collect a commission when you reunite some one with their unclaimed property and you only contact those individuals that you are 100% sure are the rightful owners of the unclaimed property. The Unclaimed Money Finder's Manual explains it all.

For almost 20 years people have paid me hundreds of thousands of dollars in fees, per year, for utilizing on their behalf, the information contained in my ebook. This ebook was written to help individuals like you, earn similar enormous amounts of money in a short period of time. Many people asked me if I could teach them how to duplicate what I am doing to make $200 plus an hour. I always said no, "I was too busy earning an income".

Over the years I have developed contacts and resources all over the country that keep me well informed in reference to "unclaimed money" developments on the government and local level. When I quit this business, these valuable resources are going to go to waste. I had to come up with a way to make this vital information available because I am getting old and slowing down, the economy is such that the demand for money finder services is going to escalate, and now is the right time. For these reason the Unclaimed Money Finders Manual was created. This manual contains all of the information necessary to provide you with all the training you will need to make $200 or more an hour. It will also inform you of everything you need to know to start almost immediately, set up your business correctly and avoid most beginner mistakes in order to guarantee that your money finder's business is a success.

This Is What You Will Discover

The Unclaimed Money Finder's Manual, tells you exactly, in precise detail, how to set up your money finder's business so you can start making up to $200 or more an hour right away. This manual will show you:

Throw Your Alarm Clock Out The Window

Imagine living every day on your OWN schedule...
...Doing waht your want, WHEN you want...
...Never again dreading Mondays or wishing for Fridays...
...Feeling like every day is a "Saturday" because you'r having fun AND making money, at the same time...

It's all possible using the Unclaimed Money Finder's Manual. This clear and simple how to operate a money finder's system gives you everything you need to say 'YES!" to the life of your dreams.