We should live and learn, but by the time we've learned, it's too late to live.
Anonymous
Advanced search 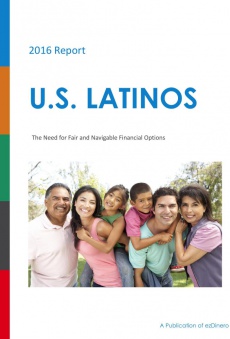 Many Latin-American Immigrants work low-wage jobs in order to support themselves and their families, and lack of legal status makes it difficult for them to access safe, affordable loans.  In the U.S. Hispanics account for the highest population in California, Texas and Florida.  Though financial resources for Latino borrowers in these areas are groing, there is still rampant discrimination and exploitation of Latino brorowers occurring on the part of lenders, landlords, and other services, particularly in urban areas.

With such a glaring economic disparity, it is clear more work needs to be done in providing viable financial solutations for the Latino population.

Reviewed by Wendy Bower on 2016-05-03
My Rate 5
excellent report. details about Latino immigrants and alternative financing available to them is invaluable resource

Reviewed by Wendy Bower on 2016-05-03
My Rate 5
excellent report. details about Latino immigrants and alternative financing available to them is invaluable resource