To Hell With Love Ebook 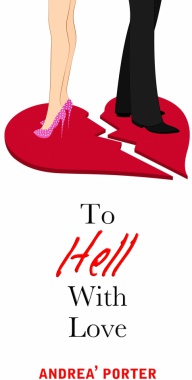 Gina Saldana is a single successful hair salon owner who is in her mid-thirties who believes that she has found her prince charming in her now fiance' Bernard. When Gina asks Bernard to move in with her, a suspicion in the back of her mind won't let her rest. Meanwhile, her bestie, Ceal, questions the relationship and soon Gina finds her Bernard isn't quite the prince charming she hoped for, her world is shattered.

As for Gina's estranged sister Tracey, love has been on her mind a lot lately too, but not with a warm fuzzy feeling. Tracey's pain from the past haunts her, keeping her from the beauty of love that she sees in so many others lives. After all she's gone through in life Tracey's not willing to let anyone get too close.

Although they are worlds apart, Gina and Tracey both begin to view romance as too risky a proposition and are ready to throw up their hands to say, "To hell with love!" But at a time when they least expected it, their idea of love are on the brink of renewal.