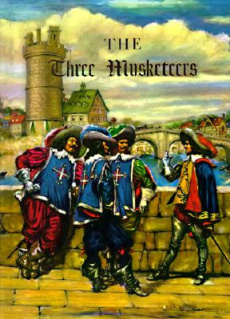 1 THE THREE PRESENTS OF D'ARTAGNAN THE ELDER

On the first Monday of the month of April, 1625, the market town of Meung, in which the author of ROMANCE OF THE ROSE was born, appeared to be in as perfect a state of revolution as if the Huguenots had just made a second La Rochelle of it. Many citizens, seeing the women flying toward the High Street, leaving their children crying at the open doors, hastened to don the cuirass, and supporting their somewhat uncertain courage with a musket or a partisan, directed their steps toward the hostelry of the Jolly Miller, before which was gathered, increasing every minute, a compact group, vociferous and full of curiosity.
In those times panics were common, and few days passed without some city or other registering in its archives an event of this kind. There were nobles, who made war against each other; there was the king, who made war against the cardinal; there was Spain, which made war against the king. Then, in addition to these concealed or public, secret or open wars, there were robbers, mendicants, Huguenots, wolves, and scoundrels, who made war upon everybody. The citizens always took up arms readily against thieves, wolves or scoundrels, often against nobles or Huguenots, sometimes against the king, but never against cardinal or Spain. It resulted, then, from this habit that on the said first Monday of April, 1625, the citizens, on hearing the clamor, and seeing neither the red-and-yellow standard nor the livery of the Duc de Richelieu, rushed toward the hostel of the Jolly Miller. When arrived there, the cause of the hubbub was apparent to all.
A young man--we can sketch his portrait at a dash. Imagine to yourself a Don Quixote of eighteen; a Don Quixote without his corselet, without his coat of mail, without his cuisses; a Don Quixote clothed in a wooden doublet, the blue color of which had faded into a nameless shade between lees of wine and a heavenly azure; face long and brown; high cheek bones, a sign of sagacity; the maxillary muscles enormously developed, an infallible sign by which a Gascon may always be detected, even without his cap--and our young man wore a cap set off with a sort of feather; the eye open and intelligent; the nose hooked, but finely chiseled. Too big for a youth, too small for a grown man, an experienced eye might have taken him for a farmer's son upon a journey had it not been for the long sword which, dangling from a leather baldric, hit against the calves of its owner as he walked, and against the rough side of his steed when he was on horseback.
For our young man had a steed which was the observed of all observers. It was a Bearn pony, from twelve to fourteen years old, yellow in his hide, without a hair in his tail, but not without windgalls on his legs, which, though going with his head lower than his knees, rendering a martingale quite unnecessary, contrived nevertheless to perform his eight leagues a day. Unfortunately, the qualities of this horse were so well concealed under his strange-colored hide and his unaccountable gait, that at a time when everybody was a connoisseur in horseflesh, the appearance of the aforesaid pony at Meung--which place he had entered about a quarter of an hour before, by the gate of Beaugency--produced an unfavorable feeling, which extended to his rider.
And this feeling had been more painfully perceived by young d'Artagnan--for so was the Don Quixote of this second Rosinante named--from his not being able to conceal from himself the ridiculous appearance that such a steed gave him, good horseman as he was. He had sighed deeply, therefore, when accepting the gift of the pony from M. d'Artagnan the elder. He was not ignorant that such a beast was worth at least twenty livres; and the words which had accompanied the present were above all price.

"My son," said the old Gascon gentleman, in that pure Bearn PATOIS of which Henry IV could never rid himself, "this horse was born in the house of your father about thirteen years ago, and has remained in it ever since, which ought to make you love it. Never sell it; allow it to die tranquilly and honorably of old age, and if you make a campaign with it, take as much care of it as you would of an old servant. At court, provided you have ever the honor to go there," continued M. d'Artagnan the elder, "--an honor to which, remember, your ancient nobility gives you the right--sustain worthily your name of gentleman, which has been worthily borne by your ancestors for five hundred years, both for your own sake and the sake of those who belong to you. By the latter I mean your relatives and friends. Endure nothing from anyone except Monsieur the Cardinal and the king. It is by his courage, please observe, by his courage alone, that a gentleman can make his way nowadays. Whoever hesitates for a second perhaps allows the bait to escape which during that exact second fortune held out to him. You are young. You ought to be brave for two reasons: the first is that you are a Gascon, and the second is that you are my son. Never fear quarrels, but seek adventures. I have taught you how to handle a sword; you have thews of iron, a wrist of steel. Fight on all occasions. Fight the more for duels being forbidden, since consequently there is twice as much courage in fighting. I have nothing to give you, my son, but fifteen crowns, my horse, and the counsels you have just heard. Your mother will add to them a recipe for a certain balsam, which she had from a Bohemian and which has the miraculous virtue of curing all wounds that do not reach the heart. Take advantage of all, and live happily and long. I have but one word to add, and that is to propose an example to you-- not mine, for I myself have never appeared at court, and have only taken part in religious wars as a volunteer; I speak of Monsieur de Treville, who was formerly my neighbor, and who had the honor to be, as a child, the play-fellow of our king, Louis XIII, whom God preserve! Sometimes their play degenerated into battles, and in these battles the king was not always the stronger. The blows which he received increased greatly his esteem and friendship for Monsieur de Treville. Afterward, Monsieur de Treville fought with others: in his first journey to Paris, five times; from the death of the late king till the young one came of age, without reckoning wars and sieges, seven times; and from that date up to the present day, a hundred times, perhaps! So that in spite of edicts, ordinances, and decrees, there he is, captain of the Musketeers; that is to say, chief of a legion of Caesars, whom the king holds in great esteem and whom the cardinal dreads--he who dreads nothing, as it is said. Still further, Monsieur de Treville gains ten thousand crowns a year; he is therefore a great noble. He began as you begin. Go to him with this letter, and make him your model in order that you may do as he has done."
Upon which M. d'Artagnan the elder girded his own sword round his son, kissed him tenderly on both cheeks, and gave him his benediction.
On leaving the paternal chamber, the young man found his mother, who was waiting for him with the famous recipe of which the counsels we have just repeated would necessitate frequent employment. The adieux were on this side longer and more tender than they had been on the other--not that M. d'Artagnan did not love his son, who was his only offspring, but M. d'Artagnan was a man, and he would have considered it unworthy of a man to give way to his feelings; whereas Mme. d'Artagnan was a woman, and still more, a mother.