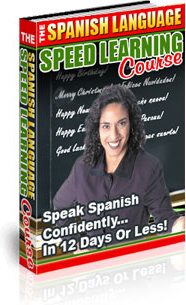 Attention: This report could make you a confident Spanish speaker in no time at all!

"Who Else Wants to Speak, Write, and Understand Spanish Using Outrageously Easy and Creative Techniques ... in Just 12 Days or Less?"

Only 12 days in your hectic schedule - that is all you need to allot in order to become an efficient Spanish speaker or conversationalist. You don't believe it?

First of all, I am aware of the fact that people's lives are getting busier and busier everyday. We are forced to fit tons of activities in a day. Sometimes there's no time left for ourselves.

Time is indeed essential to most of us. The fact that you're canvassing Spanish books in the internet means you have no time to go to any bookstore or library to acquire one. You may want to do things in the least possible time, using the easiest and most effective ways, in order to make the most out of your busy schedules.

And that works for this report as well - to help you become the Spanish speaker you have always wanted to be in the shortest time possible, yet in the most efficient way.

Learning a foreign language can be a frightening thought for many. According to them, it will just take up a lot of their time. They often disregard the wonderful opportunities that knowledge of a second language brings.

It can help you bond with people who speak the same foreign language as you do, create job opportunities and enhance your career, and impress your friends. Furthermore, engaging yourself in foreign language training actually adds self-confidence and broadens your knowledge.

That is why I extend my congratulations to you, as you have decided to improve your personal, intellectual, and social being.

Your decision to learn the Spanish language is another wise choice as it is among the most spoken languages in the world. You can never avoid dealing with a lot of its speakers some time in your life. Therefore, it isn't really enough that you know simple greetings like hi, how are you, and basic vocabularies in Spanish.

Common foreign language trainings usually bombard you with thousands of words and phrases in their vocabulary and let you memorize them until you get used to speaking them out - without really knowing how they became that way.

The most effective way to learn a foreign language is through the linguistic approach - training starts from sounds, from which words and phrases are formed, until eventual construction of sentences using these words are made.

Did you know that...


Linguistics, the study of the structure of a language, is an area of knowledge that is very important and effective; but is never really exposed to many. Yet you could be one of those few people to benefit from it!

In this light, I have prepared a comprehensive report to help you learn how to speak the Spanish language using linguistics ... in just 12 days or even less!


The Spanish Language Speed Learning Course: Speak Spanish Confidently ... in 12 Days or Less is the best training material for you, as you will be held by the hand each step of the way - from the basics up to the complicated topics in Spanish.

With pronunciation guides, accurate glosses, and ample examples, you will never have any problem understanding each Spanish word and sentence you'll be encountering, until you'll be able to create your own sentences as well.

You don't need one whole school year or even a semester to train yourself in a language that more than 250 million people speak. 12 days is all it takes to learn how to speak Spanish!

What you will find inside The Spanish Language Speed Learning Course:

And a lot, lot more!

Now is the Right Time to Start Speaking Spanish Confidently!

Just download The Spanish Language Speed Learning Course ebook - filled with in-depth linguistic research, tips and tricks for easy training, and interesting secrets that are easy to understand and fun to learn.