I am always ready to learn, but I do not always like being taught.
Winston Churchill
Advanced search

The Science of Being Well Ebook

The Science of Being Well
Category: Self Help 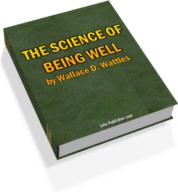 The Principle of Health

In the personal application of the Science of Being Well, as in that of the Science of Getting Rich, certain fundamental truths must be known in the beginning, and accepted without question. Some of these truths we state here: The perfectly natural performance of function constitutes health, and the perfectly natural performance of function results from the natural action of the Principle of Life.
There is a Principle of Life in the universe, and it is the One Living Substance from which all things are made. This Living Substance permeates, penetrates, and fills the interspaces of the universe. It is in and through all things, like a very refined and diffusible ether. All life comes from its life is all the life there is.
A human being is a form of this Living Substance, and has within him a Principle of Health. (The word Principle is used as meaning source.) The Principle of Health in a person, when in full constructive activity, causes all the voluntary functions of his life to be perfectly performed. It is the Principle of Health in a person which really works all healing, no matter what system. or
.remedy. is employed, and this Principle of Health is brought into Constructive Activity by thinking in a Certain Way.
I proceed now to prove this last statement. We all know that cures are wrought by all the different, and often opposite, methods employed in the various branches of the healing art. The allopath, who gives a strong dose of a counter- poison, cures his patient. And the homeopath, who gives a diminutive dose of the poison most similar to that of the disease, also cures it. If allopathy ever cured any given disease, it is certain that homeopathy never cured that disease. And if homeopathy ever cured an ailment, allopathy could not possibly cure that ailment.*
The two systems are radically opposite in theory and practice, and yet both
.cure. most diseases. And even the remedies used by physicians in any one school are not the same.
Go with a case of indigestion to half a dozen doctors, and compare their prescriptions. It is more than likely that none of the ingredients of any one of them will also be in the others. Must we not conclude that their patients are healed by a Principle of Health within themselves, and not by something in the varying remedies.?
Not only this, but we find the same ailments cured by the osteopath with manipulations of the spine, by the faith healer with prayer, by the food scientist with bills of fare, by the Christian Scientist with a formulated creed statement, by the mental scientist with affirmation, and by the hygienists with differing plans of living.
What conclusion can we come to in the face of all these facts but that there is a Principle of Health which is the same in all people, and which really accomplishes all the cures; and that there is something in all the systems. which, under favorable conditions, arouses the Principle of Health to action? That is, medicines, manipulations, prayers, bills of fare, affirmations, and hygienic prac- tices cure whenever they cause the Principle of Health to become active, and fail whenever they do not cause it to become active.