The Science Of Being Great Ebook

The Science Of Being Great
Category: Psychology 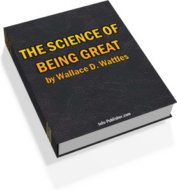 CHAPTER 1. ANY PERSON MAY BECOME GREAT.

THERE is a Principle of Power in every person. By the intelligent use and direction of this principle, man can develop his own mental faculties. Man has an inherent power by which he may grow in whatsoever direction he pleases, and there does not appear to be any limit to the possibilities of his growth. No man has yet become so great in any faculty but that it is possible for some one else to become greater. The possibility is in the Original Substance from which man is made. Genius is Omniscience flowing into man.
Genius is more than talent. Talent may merely be one faculty developed out of proportion to other faculties, but genius is the union of man and God in the acts of the soul. Great men are always greater than their deeds. They are in connection with a reserve of power that is without limit. We do not know where the boundary of the mental powers of man is; we do not even know that there is a boundary.
The power of conscious growth is not given to the lower animals; it is mans alone and may be developed and increased by him. The lower animals can, to a great extent, be trained and developed by man; but man can train and develop himself. He alone has this power, and he has it to an apparently unlimited extent.
The purpose of life for man is growth, just as the purpose of life for trees and plants is growth. Trees and plants grow automatically and along fixed lines; man can grow, as he will. Trees and plants can only develop certain possibilities and characteristics; man can develop any power, which is or has been shown by any person, anywhere. Nothing that is possible in spirit is impossible in flesh and blood. Nothing that man can think is impossible-in action. Nothing that man can imagine is impossible of realization.
Man is formed for growth, and he is under the necessity of growing.
It is essential to his happiness that he should continuously advance.
Life without progress becomes unendurable, and the person who ceases from growth must either become imbecile or insane. The greater and more harmonious and well rounded his growth, the happier man will be.
There is no possibility in any man that is not in every man; but if they proceed naturally, no two men will grow into the same thing, or be alike. Every man comes into the world with a predisposition to grow along certain lines, and growth is easier for him along those lines than in any other way. This is a wise provision, for it gives endless variety. It is as if a gardener should throw all his bulbs into one basket; to the superficial observer they would look alike, but growth reveals a tremendous difference. So of men and women, they are like a basket of bulbs. One may be a rose and add brightness and color to some dark corner of the world; one may be a lily and teach a lesson of love and purity to every eye that sees; one may be a climbing vine and hide the rugged outlines of some dark rock; one may be a great oak among whose boughs the birds shall nest and sing, and beneath whose shade the flocks shall rest at noon, but every one will be something worthwhile, something rare, something perfect.