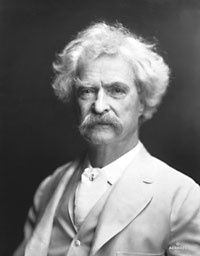 Mark Twain (pseudonym of Samuel Langhorne Clemens, 1835-1910), was an American writer, journalist and humorist, who won a worldwide audience for his stories of the youthful adventures of Tom Sawyer and Huckleberry Finn.

Clemens was born on November 30, 1835 in Florida, Missouri, of a Virginian family. He was brought up in Hannibal, Missouri. After his father's death in 1847, he was apprenticed to a printer and wrote for his brother's newspaper. He later worked as a licensed Mississippi river-boat pilot. The Civil War put an end to the steamboat traffic and Clemens moved to Virginia City, where he edited the Territorial Enterprise. On February 3, 1863, 'Mark Twain' was born when Clemens signed a humorous travel account with that pseudonym.

In 1864 Twain left for California, and worked in San Francisco as a reporter. He visited Hawaii as a correspondent for The Sacramento Union, publishing letters on his trip and giving lectures. He set out on a world tour, traveling in France and Italy. His experiences were recorded in 1869 in The Innocents Abroad, which gained him wide popularity, and poked fun at both American and European prejudices and manners.

The success as a writer gave Twain enough financial security to marry Olivia Langdon in 1870. They moved next year to Hartford. Twain continued to lecture in the United States and England. Between 1876 and 1884 he published several masterpieces, Tom Sawyer (1881) and The Prince And The Pauper (1881). Life On The Mississippi appeared in 1883 andHuckleberry Finn in 1884.

In the 1890s Twain lost most of his earnings in financial speculations and in the failure of his own publishing firm. To recover from the bankruptcy, he started a world lecture tour, during which one of his daughters died. Twain toured New Zealand, Australia, India, and South Africa. He wrote such ebooks as The Tragedy Of Pudd'head Wilson (1884), Personal Recollections Of Joan Of Arc (1885), A Connecticut Yankee in King Arthur's Court (1889) and the travel ebook Following The Equator (1897). During his long writing career, Twain also produced a considerable number of essays.

The death of his wife and his second daughter darkened the author's later years, which is seen in his posthumously published autobiography (1924). Twain died on April 21, 1910.