The Legends of Whiteknight II Ebook 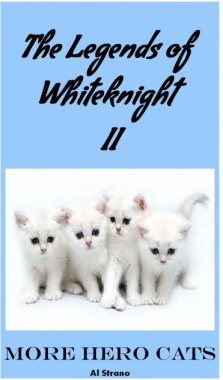 Because of Whiteknight's fame and the unwanted overtures from several suitors (especially the Chinese), Al, Amy and all the cats relocated to another supposedly secret location. Unbeknownst to Al, it was Amy's hometown and she had an ulterior motive for choosing this location. It was all part of a plan to avenge Amy's parents' deaths. Al would soon learn that his relationship with Amy had become a piece of the scheme. The scheme also included the whole cat family, whose participation would also be unveiled, now that the four kittens had demonstrated that they had inherited at least some of Whiteknight's strengths.

The cats were to be used as intelligence gatherers in order to expose a corrupt city government that was responsible for the deaths of Amy's parents. This entire operation was the brainchild of Amy's granny, who in other guises had been a druid witch and high school librarian. She was responsible for breeding Whiteknight, but being unaware of his capabilities, she sold him to Al's girl friend. The girl friend then gave the cat to Al with the belief that the cat's presence (and the witch's influence on it) would induce Al to pop the question.

He eventually did, but not to her.