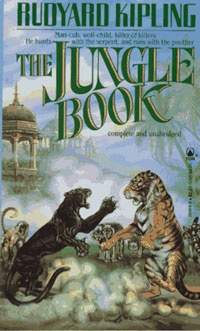 Now Rann, the Kite, brings home the night
That Mang, the Bat, sets free --
The herds are shut in byre and hut,
For loosed till dawn are we.
This is the hour of pride and power,
Talon and tush and claw.
Oh, hear the call! -- Good hunting all
That keep the Jungle Law!
Night-Song in the Jungle.

IT WAS seven o'clock of a very warm evening in the Seeonee hills when Father Wolf woke up from his day's rest, scratched himself, yawned, and spread out his paws one after the other to get rid of the sleepy feeling in the tips. Mother Wolf lay with her big gray nose dropped across her four tumbling, squealing cubs, and the moon shone into the mouth of the cave where they all lived. "Augrh!" said Father Wolf, "it is time to hunt again"; and he was going to spring downhill when a little shadow with a bushy tail crossed the threshold and whined: "Good luck go with you, O Chief of the Wolves; and good luck and strong white teeth go with the noble children, that they may never forget the hungry in this world."

It was the jackal -- Tabaqui, the Dish-licker -- and the wolves of India despise Tabaqui because he runs about making mischief, and telling tales, and eating rags and pieces of leather from the village rubbish-heaps. They are afraid of him too, because Tabaqui, more than any one else in the jungle, is apt to go mad, and then he forgets that he was ever afraid of any one, and runs through the forest biting everything in his way. Even the tiger hides when little Tabaqui goes mad, for madness is the most disgraceful thing that can overtake a wild creature. We call it hydrophobia, but they call it dewanee -- the madness -- and run.

"Enter, then, and look," said Father Wolf, stiffly; "but there is no food here."

"For a wolf, no," said Tabaqui; "but for so mean a person as myself a dry bone is a good feast. Who are we, the Gidur-log [the Jackal People], to pick and choose?" He scuttled to the back of the cave, where he found the bone of a buck with some meat on it, and sat cracking the end merrily.

"All thanks for this good meal," he said, licking his lips. "How beautiful are the noble children! How large are their eyes! And so young too! Indeed, indeed, I might have remembered that the children of kings are men from the beginning."

Now, Tabaqui knew as well as any one else that there is nothing so unlucky as to compliment children to their faces; and it pleased him to see Mother and Father Wolf look uncomfortable.

Tabaqui sat still, rejoicing in the mischief that he had made, and then he said spitefully:

"Shere Khan, the Big One, has shifted his hunting-grounds. He will hunt among these hills during the next moon, so he has told me."

Shere Khan was the tiger who lived near the Waingunga River, twenty miles away.

"He has no right!" Father Wolf began angrily. "By the Law of the Jungle he has no right to change his quarters without fair warning. He will frighten every head of game within ten miles; and I -- I have to kill for two, these days."

"His mother did not call him Lungri [the Lame One] for nothing," said Mother Wolf, quietly. "He has been lame in one foot from his birth. That is why he has only killed cattle. Now the villagers of the Waingunga are angry with him, and he has come here to make our villagers angry. They will scour the jungle for him when he is far away, and we and our children must run when the grass is set alight. Indeed: we are very grateful to Shere Khan!"

"Shall I tell him of your gratitude?" said Tabaqui.

"Out!" snapped Father Wolf. "Out, and hunt with thy master. Thou hast done harm enough for one night."

"I go," said Tabaqui, quietly. "Ye can hear Shere Khan below in the thickets. I might have saved myself the message."

Father Wolf listened, and in the dark valley that ran down to a little river, he heard the dry, angry, snarly, singsong whine of a tiger who has caught nothing and does not care if all the jungle knows it.

"The fool!" said Father Wolf. "To begin a night's work with that noise! Does he think that our buck are like his fat Waingunga bullocks?"

"H'sh! It is neither bullock nor buck that he hunts to-night," said Mother Wolf; "it is Man." The whine had changed to a sort of humming purr that seemed to roll from every quarter of the compass. It was the noise that bewilders wood-cutters, and gipsies sleeping in the open, and makes them run sometimes into the very mouth of the tiger.

"Man!" said Father Wolf, showing all his white teeth. "Faugh! Are there not enough beetles and frogs in the tanks that he must eat Man -- and on our ground too!"

The Law of the Jungle, which never orders anything without a reason, forbids every beast to eat Man except when he is killing to show his children how to kill, and then he must hunt outside the hunting-grounds of his pack or tribe. The real reason for this is that man-killing means, sooner or later, the arrival of white men on elephants, with guns, and hundreds of brown men with gongs and rockets and torches. Then everybody in the jungle suffers. The reason the beasts give among themselves is that Man is the weakest and most defenseless of all living things, and it is unsportsmanlike to touch him. They say too -- and it is true -- that man-eaters become mangy, and lose their teeth.

The purr grew louder, and ended in the full-throated "Aaarh!" of the tiger's charge.