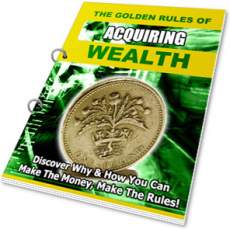 He Who Makes the Money, Makes the Rules... Learn The Time-Tested Principles of Acquiring Wealth Starting Today!

So you want to start taking your finances and wealth-building seriously. You also agree that as long as you words such as "status quo", "average", "medium", and "balance", so will your income remain just that.

But what really are the rules of acquiring wealth?

The Golden Rules of Acquiring Wealth is a ebook that details over 19 principles of building wealth that have survived the test of time. Regardless of your current position, situation or time - this material shows you 19 oversimplified rules of self-investing and building your wealth.


The Golden Rules of Acquiring Wealth


In the United States where there is more land than people, it is not at all difficult for persons in good health to make money. In this comparatively new field there are so many avenues of success open, so many vocations which are not crowded, that any person of either sex who is willing, at least for the time being, to engage in any respectable occupation that offers, may find lucrative employment.

Those who really desire to attain independence, have only to set their minds upon it, and adopt the proper means, as they do in regard to any other object which they wish to accomplish, and the thing is easily done. But however easy it may be found to make money, I have no doubt many of my hearers will agree it is the most difficult thing in the world to keep it. The road to wealth is, as Dr. Franklin truly says, "as plain as the road to the mill." It consists simply in expending less than we earn; that seems to be a very simple problem. Mr. Micawber, one of those happy creations of the genial Dickens, puts the case in a strong light when he says that to have annual income of twenty pounds per annum, and spend twenty pounds and sixpence, is to be the most miserable of men; whereas, to have an income of only twenty pounds, and spend but nineteen pounds and sixpence is to be the happiest of mortals. Many of my readers may say, "we understand this: this is economy, and we know economy is wealth; we know we can't eat our cake and keep it also." Yet perhaps more cases of failure arise from mistakes on this point than almost any other. The fact is, many people think they understand economy when they really do not.