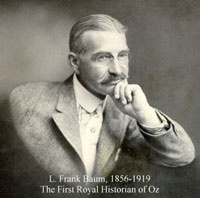 American journalist and writer, whose best-known ebook is The Wonderful Wizard of Oz (1900). Baum's stories about the imaginary Land of Oz belong to the classics of fantasy literature. The Oz series was long shunned by librarians, and neglected by scholars of children's literature. Baum has often been compared to Lewis Carroll - they both had a girl as a protagonist in their most famous works.

L. Frank Baum was born in Chittenango, New York, as the son of the oil magnate Benjamin Ward Baum and Cynthia (Stanton) Baum, a women's rights activist. He was privately tutored at home and spent two years at Peekskill Military Academy (1868-69).

In 1873 Barrie became a reporter on the New York World. Two years later he founded the New Era weekly in Pennsylvania. He was a poultry farmer with B.W. Baum and Son and edited Poultry Record and wrote columns for New York Farmer and Dairyman. In New York Baum acted as George Brooks with May Roberts and the Sterling Comedy in plays which he had written. He owned an opera house in 1882-83, and toured with his own repertory company. In 1882 he married Maud Gage; they had four sons.

Baum returned in 1883 to Syracuse to the family oil business and worked as a salesman in Baum's Ever-Ready Castorine axle grease. His own endeavor was not successful - Baum's Bazaar general store failed in South Dakota, and from 1888 to 1890 he ran the Aberdeen Saturday Pioneer. He moved to Chicago, and tried sales positions. In 1897 he founded National Association of Window Trimmers and edited Show Window from 1897 to 1902.

Baum made his debut as a novelist with Mother Goose in Prose (1897). It was based on stories told to his own children. Its last chapter introduced the farm-girl Dorothy. In 1899 appeared Father Goose: His Ebook, which quickly became a best-seller. Baum's next work was The Wonderful Wizard of Oz, a story of little Dorothy from Kansas who is transported by a 'twister' to a magical realm. The ebook, which was illustrated and decorated by W.W. Denslow, was published at Baum's own expense.

During his career Baum wrote more than 60 ebooks, some of them for adults, including The Last Egyptian (1908). He gathered material for works aimed at teenagers during his motoring tours across the country and travels in Europe and Egypt.

Born with a congenitally weak heart, Baum was ill through much of his life. He died on May 6, 1919, in Hollywood, where he had moved to a house he called Ozcot. The Oz series was continued by other writers, among them Ruth Plumly Thompson and Baum's great-grand son Roger Baum.