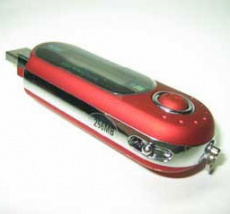 Music has become even more portable within the last 25 years. First we had the Cassette Walkman, which served us well until the portable CD player came along in the 1990's. Then came Mini Disc, which had a short but very useful life. Now we have entered the Millennium and the format of digital music compressed into a very small space is now a reality.

Since 2003/4 a flood of MP3 (MPEG-1 Audio Layer 3) music players have arrived from the far east, where these things fly out of stores as fast as manufacturers can make them. These small, stick-like players are no bigger than your thumb, however, their solid state memory can hold up to 120 minutes of MP3 tracks or up to 240 minutes of WMA (Windows Media Audio) tracks.

These players, instantly work with Windows ME/2000/XP (drivers are needed for
98/98SE). The Drivers can either come supplied as a CD-Rom or can be downloaded from your MP3 player's manufacturer's site. All you need to do is just plug the player into your PC with the cable provided, or just plug directly into your PC.
Then just drag and drop the music files you want directly into the music player's folder. These players can also be used as portable storage devices, further increasing their value. Some even have built-in FM Radios and voice recording facilities.