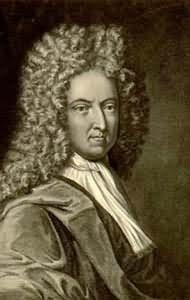 English novelist, pamphleteer, and journalist, author of ROBINSON CRUSOE (1719), a story of a man shipwrecked alone on an island. Along with Samuel Richardson, Defoe is considered the founder of the English novel. Before his time stories were usually written as long poems or dramas. He produced some 200 works of nonfiction prose in addition to close 2 000 short essays in periodical publications, several of which he also edited.

"One day, about noon, going towards my boat, I was exceedingly surprised with the print of a man's naked foot on the shore, which was very plain to be seen on the sand." (from Robinson Crusoe)

Daniel Defoe was born as the son of Alice and James Foe. His father was a City tradesman and member of the Butchers' Company. James Foe's stubborn puritanism - the The Foes were Dissenters, Protestants who did not belong to the Anglican Church - come occasionally comes through Defoe's writing. He studied at Charles Morton's Academy, London. Although his Nonconformist father intended him for the ministry, Defoe plunged into politics and trade, travelling extensively in Europe. Throughout his life, Defoe also wrote about mercantile projects, but his business ventures failed and left him with large debts, amounting over seventeen thousand pounds. This burden shadowed the remainder of his life, which he once summoned: "In the School of Affliction I have learnt more Philosophy than at the Academy, and more Divinity than from the Pulpit: In Prison I have learnt to know that Liberty does not consist in open Doors, and the free Egress and Regress of Locomotion. I have seen the rough side of the World as well as the smooth, and have in less than half a Year tasted the difference between the Closet of a King, and the Dungeon of Newgate."

In the early 1680s Defoe was a commission merchant in Cornhill but went bankrupt in 1691. In 1684 he married Mary Tuffley; they had two sons and five daughters. Defoe was involved in Monmouth rebellion in 1685 against James II. While hiding as a fugitive in a churchyard after the rebellion was put down, he noticed the name Robinson Crusoe carved on a stone, and later gave it to his famous hero. Defoe became a supporter of William, joining his army in 1688, and gaining a mercenary reputation because change of allegiance. From 1695 to 1699 he was an accountant to the commissioners of the glass duty and then associated with a brick and tile works in Tilbury. The business failed in 1703.

In 1702 Defoe wrote his famous pamphlet THE SHORTEST-WAY WITH THE DISSENTERS. Himself a Dissenter he mimicked the bloodthirsty rhetoric of High Anglican Tories and pretended to argue for the extermination of all Dissenters. Nobody was amused, Defoe was arrested in May 1703, but released in return for services as a pamphleteer and intelligence agent to Robert Harley, 1st Earl of Oxford, and the Tories. While in prison Defoe wrote a mock ode, HYMN TO THE PILLORY (1703). The poem was sold in the streets, the audience drank to his health while he stood in the pillory and see aloud his verses.