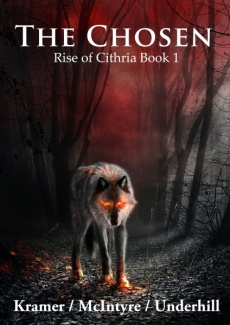 The beginning of a six-part fantasy epic! Three kingdoms at war, each kingdom written by a different author, with different characters, styles, and inspirations. Book 1, The Chosen, shows the early stages of this story. Characters from the militaristic human kingdom of Caldera discover a strange mystery that leads them into battlefields far to the north, in search of survivors from a fabled lance company that went missing. Explorers from Andua, the home of magic-wielding humans, elves, nuathreen and firbolgs, search undiscovered caves deep below the forest, some scavenging for treasure, while others help a young woman find her lost love. Hardy warriors from Bergmark, a northern kingdom ruled by dwarves and their havtrol allies, have attacked the northern regions of both Andua and Caldera, and now a small band of them hunt renegade havtrols who are rampaging through the defenseless villages of their new subjects. The three groups start on separate paths, but their quests will converge in ways they didn't think possible, leading them to discover a fourth realm, long forgotten, but no longer dormant.