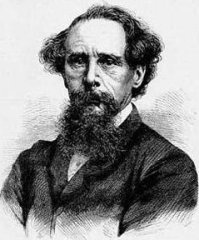 Charles Dickens (1812-1870) is considered to be one of the greatest English novelists of the Victorian period. Dickens's works are characterized by attacks on social evils, injustice, and hypocrisy.

Charles Dickens was born in Landport, Hampshire on February 7, 1812. His father was a clerk in the navy pay office, who was well paid but often ended up in financial troubles. In 1814 Dickens moved to London, and then to Chatham, where he received some education. He worked in a blacking factory, Hungerford Market, London, while his family was in Marshalea debtor's prison in 1824).

In 1824-27 Dickens studied at Wellington House Academy, London, and at Mr. Dawson's school in 1827. From 1827 to 1828 he was a law office clerk, and then worked as a shorthand reporter at Doctor's Commons. He wrote for True Son (1830-32), Mirror of Parliament (1832-34) and the Morning Chronicle (1834-36). He was in the 1830s a contributor to the Monthly Magazine, and The Evening Chronicle and edited Bentley's Miscellany. In the 1840s Dickens founded Master Humphry's Clock and edited the London Daily News.

Dickens's career as a writer of fiction started in 1833 when his short stories and essays appeared in periodicals. His Sketches By Boz and The Pickwick Papers were published in 1836.In the same year he married the daughter of his friend George Hogarth, Catherine Hogarth.

The Pickwick Papers were stories about a group of rather odd individuals and their travels to Ipswich, Rochester, Bath and elsewhere. Dickens's novels first appeared in monthly installments, including Oliver Twist (1837-39), which depicts the London underworld and hard years of the foundling Oliver Twist, Nicholas Nickelby (1838-39), a tale of young Nickleby's struggles to seek his fortune, and The Old Curiosity Shop (1840-41).

From the 1840s Dickens spent much time traveling and campaigning against many of the social evils of his time. In addition he gave talks and reading, wrote pamphlets, plays, and letters. In the 1850s Dickens was founding editor of Household Words and its successor All the Year Round (1859-70). In 1844-45 he lived in Italy, Switzerland and Paris. He gave lecturing tours in Britain and the United States in 1858-68.

From 1860 Dickens lived at Gadshill Place, near Rochester, Kent. He died at Gadshill on June 9, 1870. The unfinished mystery novel The Mystery Of Edwin Drood was published in 1870.