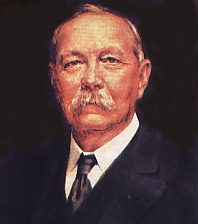 Arthur Conan Doyle was born to a family of Roman Catholics in Edinburgh, in 1859. His father, Charles, was a civil servant who suffered from epilepsy and alcoholism. He was educated in Jesuit schools and eventually lost his faith in Catholicism in favor of his Jesuit training. He would later use his friends and teachers from Stonyhurst College as inspiration for characters in his Holmes stories.

Doyle married Louise Hawkins in 1884 and then in 1885 he graduated as a doctor from Edinburgh University. After graduation Doyle practiced medicine and specialized in eye care in Hampshire. He remained there until 1891 when he became a full time writer. His first story, a Sherlock Holmes novel called A Study in Scarlet, had been published in 1887.

Doyle followed his first novel with The Sign of Four and then in 1891 The Adventures of Sherlock Holmes was incrementally published by the Strand Magazine. His works were met with public approval and he soon became quite popular, in fact he would eventually, in the 1920s, become one of the highest paid writers in the world. But the massive initial popularity had an affect on Doyle and by the end of 1891 he had sworn to end the series, which he thought he achieved by killing Sherlock Holmes in The Final Problem, which was published in December of 1893.

During the South African War (1899-1902) Doyle served as a physician in a field hospital, where he wrote The Great Boer War in which he defended the policy of his homeland. After the war, in 1902, Doyle returned to England and was knighted. He then took up the pen again for the revered detective and published The Hound of the Baskervilles, a prequel, in 1902. He then resurrected his dead logician in The Empty House and continued writing short stories about Holmes and Watson.

In 1906 Doyle ran for Parliament but failed to be elected, the next year his wife, long ill, died. Shortly after his wife's death Doyle remarried to Jean Leckie. Then, in WWI, his son died. This was a tragedy for Doyle and it affected him deeply. As a result he dedicated the rest of his life to spiritual causes. His last ebook, a collection of short stories known as The Casebook of Sherlock Holmes was published in 1927. Doyle died of heart disease on July 7, 1930.