I am always ready to learn, but I do not always like being taught.
Winston Churchill
Advanced search 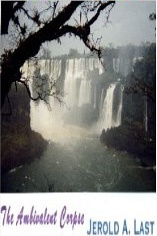 What do a dismembered body and South American indigenous creation legends have in common?  The answer to this question is a crucial clue as Roger Bowman and Suzanne foster solve a brutal murder in Montevideo, Uruguay.  But, before they can solve this suspenseful whodunit mystery, they find themselves visiting much of the rest of Uruguay, as well as Argentina, Brazil, and Paraguay, in search of clues. One site they visit is Iguazu Falls (the book cover is a photo the author's wife took of the Falls), the largest waterfall in the world as measured by volume of water passing over the Falls, and the site of one of the largest hydroelectric dams in the world.

Readers will get an introduction to several of the countries in the southern tier of South America, as well as regional foods and wines and to Montevideo, the capital city of Uruguay.  The author has lived in Montevideo and knows it well, both as a resident and as a tourist.

The Ambivalent Corpse introduces several important recurring characters from the Roger and Suzanne South American mystery series who we'll meet again in later books of the series.  The novel may be downloaded FREE from Kindle Unlimited.