The Adventures of Fawn: Book1 'Til the Last Snowflake Falls Ebook 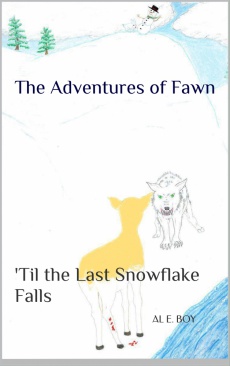 Legendary reindeer Comet and Vixen have a precocious daughter named Fawn. They all live together in the stable at Santa's Village. It's a safe, warm, comfortable life, but little Fawn thinks it's as boring as a melting snowball. While Fawn wants nothing more than to go exploring in the great outdoors, her parents warn her many dangers lurk in the world outside Santa's Village. They fear she is too young and too inexperienced to venture outside alone. Fawn doesn't agree, and begins sneaking out each day while her parents are busy, looking for fun, friends and adventure.

She boldly declares, "I want some fun and excitement! I don't care how dangerous it is!

But Fawn has no idea what awaits her. She does make some friends, but she also finds herself facing a wild, hungry wolf, trying to survive a fierce North Pole blizzard, and is captured by strangers collecting animals of the Arctic to sell to a New York City zoo.

But Santa and company come to the rescue in the nick of time.

Fawn's first week of freedom brings the precocious youngster many dangers, and some realizations as well about what really is important in life.