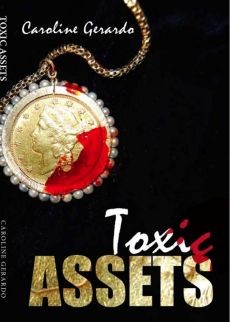 Caroline Gerardo's novel, TOXIC ASSETS is a thrilling example of what went very wrong in the mortgage banking business. The people protesting against waste in big business as Occupy Wall Street even read this ebook they would be shocked at what goes on inside. All the details of extrvagant locations are true. The fine marble security entrance to the Newport Beach office. The lavish trips to Turks and Caicos to party and perhaps hide money in offshore banks. The out of control gambling in Las Vegas. The story takes the reader inside and spins a tale so wild but true

Caroline is an insder from the mortgage industry for twenty years. This fictional story reveals how and why so many banks imploded from a perspective never seen before, from the eyes of a real female character.

"Katherine McVeigh is the strong woman president of "Nationwide Bank." She is lovely but frail emotionally, healing from a failed marriage. In accepting the position, she does not realize she is a target for a set up for the murders of Board Members for profit. Her exhusband has taken all her assets, but she strives to rebuild for her young sons. As the plot thickens, she begins to feel something for Rob, a new man in her life. This surprises Katherine as perhaps she is not ready for a relationship.

Caroline Gerardo writes in a fast paced short bursts and beautiful descriptions of character motivations, settings and their emotions. The writing takes you into a world that is complex but you don't need to know what CDO's are to understand as an insider as well.

The ebook is modestly priced at less than a dollar - this payback for the Mortgage Meltdown is a bargain and an education.

Summary:
Katherine McVeigh has a successful career as Head of Secondary at Bear Stearns. Her husband, a Wall Street bond trader disappears after hiding all their savings and his fraudulent activities at work. She accepts a new position in Newport Beach California as President of the Mortgage Division of Nationwide Bank to get away from her failed marriage and make a new start. What she does not know in moving her sons across country that she going to be framed for the murders of Board Members of the bank. She struggles with balancing her career goals and raising her sons. Rob, a co-worker develops a new love interest. The story shows the lavish expenses of a President's Awards party in the Turks and Caicos. While at the island party, a second Board Member is murdered. Katherine finds herself drugged at the crime scene. Rob comes to her rescue and "helps" dispose of the body.
Does she trust the right person?