TO HIDE from DEATH Ebook 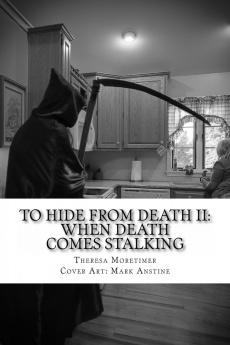 Kelly Price believed her nightmare was over.  The man trying to kill her was finally dead.  WRONG AGAIN!  Her nightmare has only begun.

As she awakens from her nap after Tom has left, Kelly hears a tapping on her window and the window is streaked in blood.  She frantically dials 9-1-1 in the hopes of someone helping her.  The operator tells her to stay put until someone arrives.

When the deputy does arrive he discovers a gruesome scene and tries his best to shield Kelly from it.  Kelly had tried to reach Tom, but to no avail.

The person wanting her dead is still very much alive and Kelly is really running out of time trying to find out who it is before it's too late.

With so many scenarios dancing through her head she has a hard time trying to decipher fact from fiction and friend from foe.  Will she ever be able to find someone she can trust?  Will she be able to discover who the sadistic stalker really is?  Find out the answers to these and many more questions in Theresa Mortimer's TO HIDE from DEATH II: When death comes stalking.