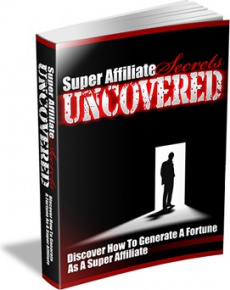 Learn How To Generate A Fortune As A Super Affiliate

Why be an affiliate when you can be a Super Affiliate. The process is the same, but the paychecks are significantly different! Go for the gold and the larger than life lifestyle.

Terry:
Welcome to the affiliate marketing workshop featuring Rosalind Gardner. My name is Terry Telford and I'll be your host for today's session as we talk to Rosalind about the business of affiliate marketing. Rosalind Gardner is one of the world's premiere super affiliates, and her story is very, very inspirational, because she didn't have any business background. In spite of that, she developed an affiliate business system that earns her an excess of $500,000 in U.S. dollars. Being a Canadian, she is able to leverage that further because of the fluctuations and exchange rates. Rosalind has agreed to share her wealth of knowledge with us today, and show us exactly how we can follow in her footsteps and start earning a really respectable affiliate paycheck. So, I'd like to start out by saying thank you very much for taking the time to be with us today, Rosalind.

Rosalind:
And thank you for asking me today, Terry.

Terry:
Maybe you can start out by telling us a little bit about yourself and how you ended up getting into affiliate marketing in the beginning.

Rosalind:
I actually had no previous business experience, so it's interesting to find myself where I am today. I was an air traffic controller and I did that for about 20 years. Towards the end of my career, they made some significant changes to the way they scheduled air traffic controllers and I found that it was impacting my health pretty seriously, so I needed a way out. That was around the time the Internet was starting to bloom. I learned how to design a really crappy webpage. I clicked on a banner ad that said, "Webmasters make money," and what I landed on was a program called The One and Only Dating Network. They sold dating service memberships.

At around the same time, I was spending a lot of time in chat rooms, and the service that they were providing really made sense to me if you wanted to meet someone online as opposed to being in a chat room where you really had no idea who you were talking to. At least with the One and Only Dating Network service, you could select who you were going to speak with and contact based on geography, education, values, and whatever else you want. So, it was something I could really get into.

But, the page I landed on was for their affiliate program. So, you could sell their dating service memberships and earn 50% of what people were paying for the membership on a monthly basis. Say someone bought a membership for $24.95 a month, you would earn about $12.50 a month from this. I thought, "Cool. I can design a really crappy webpage... maybe I'll put together a little website that promotes this service.

Sure enough, I registered a domain, and I got my site listed with Yahoo! in just a couple of days. That doesn't happen any longer, but there are still great ways to market your site. Basically, the first day it was listed with Yahoo!, I made a sale. A month later I got a check for $10.99. Basically, the rest is history. That proved positive to me that you could really make money like this, and by the end of the very first year I was clearing $5,000 a month and by the second year I quit my job as an air traffic controller.