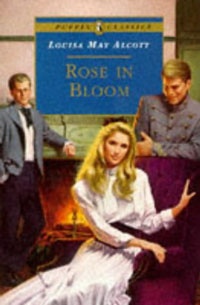 As authors may be supposed to know better than anyone else what they intended to do when writing a ebook, I beg leave to say that there is no moral to this story. Rose is not designed for a model girl, and the Sequel was simply written in fulfillment of a promise, hoping to afford some amusement, and perhaps here and there a helpful hint, to other roses getting ready to bloom.

Three young men stood together on a wharf one bright October day awaiting the arrival of an ocean steamer with an impatience which found a vent in lively skirmishes with a small lad, who pervaded the premises like a will-o'-the-wisp and afforded much amusement to the other groups assembled there.

"They are the Campbells, waiting for their cousin, who has been abroad several years with her uncle, the doctor," whispered one lady to another as the handsomest of the young men touched his hat to her as he passed, lugging the boy, whom he had just rescued from a little expedition down among the piles.

"Which is that?" asked the stranger.

"Prince Charlie, as he's called a fine fellow, the most promising of the seven, but a little fast, people say," answered the first speaker with a shake of the head.

"Are the others his brothers??

"No, cousins. The elder is Archie, a most exemplary young man. He has just gone into business with the merchant uncle and bids fair to be an honor to his family. The other, with the eyeglasses and no gloves, is Mac, the odd one, just out of college.?

"Oh, he is Jamie, the youngest brother of Archibald, and the pet of the whole family. Mercy on us he'll be in if they don't hold on to him!?

The ladies' chat came to a sudden end just there, for by the time Jamie had been fished out of a hogshead, the steamer hove in sight and everything else was forgotten. As it swung slowly around to enter the dock, a boyish voice shouted, "There she is! I see her and Uncle and Phebe! Hooray for Cousin Rose!" And three small cheers were given with a will by Jamie as he stood on a post waving his arms like a windmill while his brother held onto the tail of his jacket.

Yes, there they were Uncle Alec swinging his hat like a boy, with Phebe smiling and nodding on one side and Rose kissing both hands delightedly on the other as she recognized familiar faces and heard familiar voices welcoming her home.

"Bless her dear heart, she's bonnier than ever! Looks like a Madonna doesn't she? with that blue cloak round her, and her bright hair flying in the wind!" said Charlie excitedly as they watched the group upon the deck with eager eyes.

"Madonnas don't wear hats like that. Rose hasn't changed much, but Phebe has. Why, she's a regular beauty!" answered Archie, staring with all his might at the dark-eyed young woman with the brilliant color and glossy black braids shining in the sun.

"Dear old Uncle! Doesn't it seem good to have him back?" was all Mac said, but he was not looking at "dear old uncle" as he made the fervent remark, for he saw only the slender blond girl nearby and stretched out his hands to meet hers, forgetful of the green water tumbling between them.

During the confusion that reigned for a moment as the steamer settled to her moorings, Rose looked down into the four faces upturned to hers and seemed to see in them something that both pleased and pained her. It was only a glance, and her own eyes were full, but through the mist of happy tears she received the impression that Archie was about the same, that Mac had decidedly improved, and that something was amiss with Charlie. There was no time for observation, however, for in a moment the shoreward rush began, and before she could grasp her traveling bag, Jamie was clinging to her like an ecstatic young bear. She was with difficulty released from his embrace to fall into the gentler ones of the elder cousins, who took advantage of the general excitement to welcome both blooming girls with affectionate impartiality. Then the wanderers were borne ashore in a triumphal procession, while Jamie danced rapturous jigs before them even on the gangway.

Archie remained to help his uncle get the luggage through the Custom House, and the others escorted the damsels home. No sooner were they shut up in a carriage, however, than a new and curious constraint seemed to fall upon the young people, for they realized, all at once, that their former playmates were men and women now. Fortunately, Jamie was quite free from this feeling of restraint and, sitting bodkinwise between the ladies, took all sorts of liberties with them and their belongings.

"Well, my mannikin, what do you think of us?" asked Rose, to break an awkward pause.

"You've both grown so pretty, I can't decide which I like best. Phebe is the biggest and brightest-looking, and I was always fond of Phebe, but somehow you are so kind of sweet and precious, I really think I must hug you again," and the small youth did it tempestuously.

"If you love me best, I shall not mind a bit about your thinking Phebe the handsomest, because she is. Isn't she, boys?" asked Rose, with a mischievous look at the gentlemen opposite, whose faces expressed a respectful admiration which much amused her.

"I'm so dazzled by the brilliancy and beauty that has suddenly burst upon me, I have no words to express my emotions," answered Charlie, gallantly dodging the dangerous question.

"I can't say yet, for I have not had time to look at anyone. I will now, if you don't mind." And, to the great amusement of the rest, Mac gravely adjusted his eyeglasses and took an observation.

"Well?" said Phebe, smiling and blushing under his honest stare, yet seeming not to resent it as she did the lordly sort of approval which made her answer the glance of Charlie's audacious blue eyes with a flash of her black ones.

"I think if you were my sister, I should be very proud of you, because your face shows what I admire more than its beauty truth and courage, Phebe," answered Mac with a little bow full of such genuine respect that surprise and pleasure brought a sudden dew to quench the fire of the girl's eyes and soothe the sensitive pride of the girl's heart.

Rose clapped her hands just as she used to do when anything delighted her, and beamed at Mac approvingly as she said: "Now that's a criticism worth having, and we are much obliged. I was sure you'd admire my Phebe when you knew her, but I didn't believe you would be wise enough to see it at once, and you have gone up many pegs in my estimation, I assure you.?