Quest for Knowledge (Volume 1 of the FirstWorld Saga) Ebook 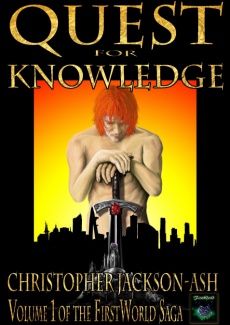 FirstWorld is at the centre of the multiverse. It is the dimension that existed as the universe before The Sundering ripped apart Time and created a myriad of new dimensions. Now FirstWorld is under threat together with the entire multiverse. A Hero is needed to wield a great Sword, perhaps the most powerful weapon ever created.

Simon Redhead is a medical student in the near future of a dimension not unlike our own. He is shy and mild-mannered but by chance carries the genes that could make him a great manifestation of the Everlasting Hero. He is snatched from his dimension and taken to FirstWorld where he learns about the threat and is pressed into service.

How will someone who has sworn to do no harm reconcile with the opportunity to take up a terrible weapon and butcher people? Simon will struggle to understand the cosmic battle between Law and Chaos, and the role that The Balance plays. He will try to understand where good and evil fit in.

His travels in time will inadvertently contribute to The Sundering. Will he choose to stay in the past with a primitive Paleolithic tribe, where he finds happiness, or will he return to the present and help his new friends defeat the enemy at the gates of the Wizards' Keep?

This is epic fantasy inspired by J.R.R. Tolkien and Michael Moorcock. It is elves & dwarves meets sword & sorcery with a few time travel paradoxes thrown in for good measure.

There's lots more free stuff, Kris the Bard's blog and the other three volumes of the FirstWorld Saga at our web site - just search FirstWord Saga.