Profiting After The Sale Ebook

Profiting After The Sale
Category: E-Business 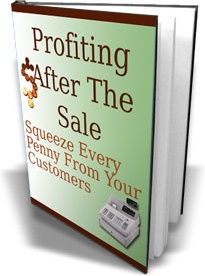 +$5
Title: Profiting After The Sale
Description:

"Is There Only One Buy Now Button On Your Page? If You Think So, You Are Flushing Good Money Down The Drain!"

How hard do you work to drive traffic to your website?

If you are anything like the thousands of other Internet Marketers I've met with, I'm sure that you kill yourself working 12 hour days to ensure that you are driving enough traffic to your website to make it profitable. You probably wrack your brain thinking up new traffic driving ideas and spend hours analyzing your conversion numbers to make sure that you are making the amount of money that your site ought to be making.

But have you ever wished that instead of one sale each, everyone who buys from you would buy twice. Maybe you've wished for a glitch in the PayPal computers or a browser problem that records every click twice. Have you ever sat down and figured out the math? How much money would you make if even half of everyone who has ever bought from you, bought twice?


I know, it's a ridiculous scenario, but if it were possible or if it did happen, how great would that be, huh?

You know, one of my websites had just such a problem and in correcting it, I figured out one of the most tightly controlled secrets in the IM business. If you listen closely, I'll do my best to explain everything to you...

It all started when one of my affiliate sites actually did have a glitch on it. It wasn't a payment glitch, but a counter problem. I started sending traffic to the site and I realized that my conversion rate was nearly double what it normally was. So, as you can probably imagine, I got really overexcited.

When after a day or two of driving traffic and seeing my conversion rate hover between 6 and 10% I knew that something was much too good to be true.

I was selling online for a couple of years at this point and I pretty much had my business on autopilot. I knew what to do to make money and I knew which tricks worked. There wasn't a lot of creativity in my business and things ran fairly regularly.

I hate to say it, but I was getting bored with my work online. I was making a decent salary, but not the huge payday that I was searching for when I started. I thought working as an Internet marketer would be fun, exciting and profitable, but it really became mundane and boring. I was starting to think about doing something else...that is until I saw my conversion rate shoot to 10%.

When I saw the 10% conversion rate, I didn't believe it at first. I knew that I had driven a ridiculous amount of traffic to the site and if all those people were converting at such a high rate I clearly stumbled upon something very, very powerful. I quickly scanned my site to see what I was doing right.

The rush of adrenaline I experienced was overwhelming. I didn't know what to do first. I checked my site over and over again and I couldn't find anything different than the other hundred or so sites I've put up over the years. Everything looked to be the same.


Something clearly wasn't, since my customers were buying at an alarming rate. My heart was pumping and I couldn't believe how exciting marketing was to me again. I couldn't wait to put a new affiliate site up to see if the results were the same.

I started pumping more and more traffic to my site, working day and night (almost non-stop) to take advantage of this mysterious jewel.

After two days of busting my hump to exploit this site as best as I could, I realized why my site was converting so well. I wish it really was due to a magical trick I learnt, but alas, the reason my site was converting was because I put my statcounter in the wrong place. My counter was only recording a fraction of the hits that it should have been. Once I fixed the problem, my excitement turned to annoyance when I saw my conversion level drop down to modest, regular and expected proportions.

For the next week all I could think about was my 10% conversion rate. I knew that it was an inflated number, but I couldn't get the concept of converting that many people out of my mind. The truth is, it wasn't the conversion rate that obsessed me, but the way the numbers were manipulated.

I knew that the only reason my conversion rate was that high was because I wasn't recording the hits correctly. I had more traffic and my real conversion rate I'll probably never know, but the faulty tracking system manipulated the numbers to make it appear I was doing much better than I really was. This is the thought that kept kicking around in my head....manipulation of numbers.

The more I thought about it, the more I started manipulating other numbers. Even theoretical, the concept wouldn't leave my head. What if instead of the tracker not counting every hit, but it counted every hit twice? What if my tracker didn't count every sale or what if it counted every sale twice...these were ideas that I didn't think had any realistic use, but kept circling my brain. I wondered if there was a way to turn these concepts into reality.

I kept returning to the idea of my tracker counting each sale twice...or better yet, if each customer bought twice. The numbers jumped out at me and made me realize that this is where the big money was made. The more I started thinking about it, the more excited I got. I really started wondering, can I sell to the same customer twice?

I quickly took out a pen and paper, did the math and realized how much more money I could make if I applied a simple 50% second product conversion rate. It was then that I started realizing how I could really make the kind of money I dreamed of online.

I started building my websites and driving the traffic to buy a different product from me after they purchased the first product. I was utilizing upsells, downsells and One Time Only Offers. I searched and found every after-sale technique available and applied it to my online business.

It took some time, but I finally perfected the process. I'm now able to sell two, three ever four different products in the same transaction. Each customer of mine is squeezed until there isn't any money left to spend and I'm sitting pretty, finally happy to be working online.

"Let Me Show You How To Squeeze Every Dime Out Of Your Customers Too!"

It might seem farfetched to sell multiple products to one customer when it's hard enough selling just one product most of the time. Let me clue you in on one secret right now. It's easier to sell a subsequent product after someone has already decided to purchase. The first sale is the hard part, the second, third or fourth sale is MUCH easier.

This isn't a dream or a hypothetical concept. Profiting After The Sale is filled with real secrets that all the big guru's regularly use to squeeze every sale out of every customer.

The only way to make money online is to make sure that every single customer spends as much money as possible on every purchase. The Internet big shots will tell you that the only way to do that is to hit each customer again and again, making sure that they buy more than just that first time.

Don't settle for anything less than marketing stardom, this is your chance to double, triple even quadruple your sales without driving any more traffic to your sites! If you think you are ready to start making more money online, than pick up this book now.

Profiting After The Sale Will Help You...


Don't Be Left Struggling To Make Money, This Is Your Chance To Hit It Big!

Do you believe you are doing all that you possibly can do to make money online? Do you believe that your efforts could be strong, better, faster and easier?

Chances are, they can be.

Learn from Profiting After The Sale how to increase the amount of sales you make simply by selling more products to the same amount of customers.

If you are beating you head against your desk trying to drive 100's of people to your site just to make an extra couple of sales, you could make those same extra few sales without any of the hard work just by selling to the people who've already bought. It's a well established fact that it's easier to get an existing customer to buy again than it is to get a new customer to buy once.

Learn how you can do take advantage of these marketing secrets. Don't hesitate, buy Profiting After The Sale today.

Profiting After The Sale will explain everything you need to know so you can start to profit right now.