Power Through Repose
Category: Self Help 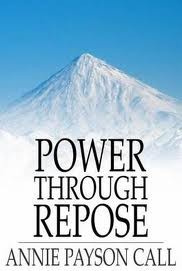 I. THE GUIDANCE OF THE BODY

THE literature relating to the care of the human body is already very extensive. Much has been written about the body's proper food, the air it should breathe, the clothing by which it should be protected, the best methods of its development. That literature needs but little added to it, until we, as rational beings, come nearer to obeying the laws which it discloses, and to feeling daily the help which comes from that obedience.

It is of the better use, the truer guidance of this machine, that I wish especially to write. Although attention is constantly called to the fact of its misuse,as in neglected rest and in over−strain,in all the unlimited variety which the perverted ingenuity of a clever people has devised, it seems never to have come to any one's mind that this strain in all things, small and great, is something that can be and should be studiously abandoned, with as regular a process of training, from the first simple steps to those more complex, as is required in the work for the development of muscular strength. When a perversion of Nature's laws has continued from generation to generation, we, of the ninth or tenth generation, can by no possibility jump back into the place where the laws can work normally through us, even though our eyes have been opened to a full recognition of such perversion. We must climb back to an orderly life, step by step, and the compensation is large in the constantly growing realization of the greatness of the laws we have been disobeying. The appreciation of the
power of a natural law, as it works through us, is one of the keenest pleasures that can come to man in this life.

The general impression seems to be that common−sense should lead us to a better use of our machines at once. Whereas, common−sense will not bring a true power of guiding the muscles, any more than it will cause the muscles' development, unless having the common−sense to see the need, we realize with it the necessity for cutting a path and walking in it. For the muscles' evelopment, several paths have been cut, and many who are in need are walking in them, but, to the average man, the road to the best kind of muscular development still remains closed. The only training now in use is followed by sleight−of−hand performers, acrobats, or other jugglers, and that is limited to the professional needs of its followers.

Again, as the muscles are guided by means of the nerves, a training for the guidance of the muscles means, so far as the physique is concerned, first, a training for the better use of the nervous force. The nervous system is so wonderful in its present power for good or ill, so wonderful in its possible power either way, and so much more wonderful as we realize what we do not know about it, that it is not surprising that it is looked upon with awe. Neither is it strange that it seems to many, especially the ignorant, a subject to be shunned. It is not uncommon for a mother, whose daughter is suffering, and may be on the verge of nervous prostration because of her misused nerves, to say, "I do not want my daughter to know that she has nerves." The poor child knows it already in the wrong way. It is certainly better that she should know her nerves by learning a wholesome, natural use of them. The mother's remark is common with many men and women when speaking of themselves, common with teachers when talking to or of their pupils. It is of course quite natural that it should be a prevailing idea, because hitherto the mention of nerves by man or woman has generally meant perverted nerves, and to dwell on our perversions, except long enough to shun them, is certainly unwholesome in the extreme.