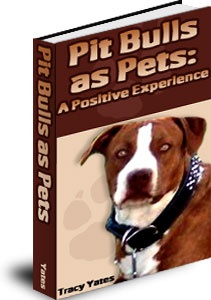 "Are You Under The Negative Influence Of Hyped Media Stereotypes When It Comes To Your Knowledge Of Pit Bulls?"

What is the image that immediately comes into your mind when you think of the words "Pit Bull"?

I can almost guarantee that they would be somewhere close to fierce, ferouscious, vicious, killer, unstoppable, uncontrollable, or locking jawed man-eaters.

Heck, maybe even all of those words would adequately fit the vision you have ingrained from negative reports, horror stories, graphic "after-attack" photo images and terrifying news broadcasts.

But, do you really know anything beyond what you have been "spoon fed" about the breed known as The American Pit Bull Terrier??

I was under these same wrong impressions myself before I became an unlikely Pit Bull owner!

If you were to come up to me 2 years ago and ask what my opinion of the Pit Bull was, I would have told you that bringing even one into my home would be to do the unthinkable since I have 6 children of varying ages. No way would I ever let one of those vicious "baby-killers" around my precious darlings!!

My husband was really the one who literally opened my eyes about Pit Bulls. He had stumbled upon the opportunity he had been waiting for to own a Pit Bull, even after all my incessant ranting and raving about why this was a horrible, not to mention fatally dangerous, idea. He played on my love for animals. And he won!

A co-worker had just purchased a Pit Bull puppy, but could no longer keep him. She had spoke to others about this delimma and was going to have the puppy put down at the local animal shelter if she could not find someone, anyone, who would take in the little tike.

So, along comes my husband, an enthusiastic lover of the Pit Bull and says, of course he will take the pup. Everyone wins, right? WRONG! He still had yet to run this bit of "news" by me. And, being the kind man that he is, he calls me and tells me the whole, sad, story of this tiny little pup who is about to be put to death if his owner cannot find a good home for him.

What can I say? I'm a sucker! I had no idea what was going to come through the front door with my husband after work that night. And boy, was I sweating bullets!! Of course I was on the defensive right away and the pup had not even even set paw one inside the front door!

But, when I saw the contents of the little cardboard box my husband carried under his left arm, I was instantly in love!! That tiny little sweet face looked up at me and that's all it took. Every stereotype I had ever heard melted straight away.

This little bundle of fur was so tiny, and he was shaking, so afraid of what was happening to him. Well, of course, I had to pick him right up out of there and cuddle him :-)

That was all it took. I was sold! He was staying and that was that. Now it was an "everybody wins" situation. All that was left was picking out his name and of course telling the children that we had a new puppy.

Now, after 2 years we are the proud owners of 3 amazing, loving, and loyal Pit Bulls named Tank, Beatrix, and Heaven. And I wouldn't trade them for anything in this world!! They are an integral part of our family and life without them would never be the same.

To change my opinion took real life experience, and not a "story" that someone had told me. It's sort of like when you believe you don't like something just because you've heard it wasn't good for you, but you've never even tried it yourself to know for sure. Like trying peanuts, or learning to ride a bike, or swimming.

Any one of those thing could lead to deadly consequences, but rarely do.

Statistically at least. But do those statistics stop people from consuming millions of peanuts each year?? Or venturing out the front door and hopping on their bicycle and zooming off down the street?? Of course not! If they did, there would be some major corporations out of business!

Life would be pretty boring if we never took a chance and tried something new, even though we knew beforehand what the dangers were. That simply wouldn't be living!

Am I asking that you put your personal feelings aside and open up your home to Pit Bulls everywhere? Of course not!!

What I am asking is that you take a chance and learn something new by educating yourself on the real facts about the breed known as the Pit Bull. And that's exactly what you will be doing when you pick up a copy of Pit Bulls As Pets: A Positive Experience.

Here is what you will learn when you decide to order your own copy of this fascinating ebook today:

This ebook will give you the power of knowledge and the opportunity to share that new found knowledge with others that may have the same impression that you had of the American Pit Bull Terrier.