PREGNANCY from A to Z Ebook

PREGNANCY from A to Z
Category: Health, Women 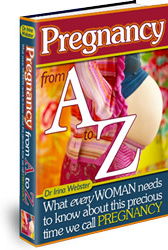 +$5
Title: PREGNANCY from A to Z
Author: Irina Webster
Description:
"Everything You Need to Know About Having A Baby"

Dear Mom To Be,

Whether you are trying to get pregnant or are already expecting you no doubt have dozens of questions that you would like to have answered.

Written by a medical professional, "Pregnancy From A to Z" is just what the doctor ordered to answer all your questions. In fact, it probably has answers to questions you haven't even asked yet!

"Pregnancy From A to Z" not only discusses the entire aspects of pregnancy, it also sheds light on what you should do before becoming pregnant to insure a healthy and happy child.

What's more is a full chapter discussion about increasing the odds for having a boy or a girl! No guarantees of course, but there are things you can do to sway the odds in your favor.

What we hope you will learn is how to be prepared for what is to come as your pregnancy progresses. Why should you read "Pregnancy From A to Z?"

Because of the author!

Not only is the author a medical doctor specializing in women and children's health issues, she is also a wife and mother. And as if that weren't enough, in addition to traditional medicine she explores the alternative methods as well and incorporates a holistic approach to her practice.

As you can see in the following list "Pregnancy From A to Z" covers it all:

All this and more await you in "Pregnancy From A to Z" a definite must have to answer all those burning questions about becoming pregnant.

Who better to teach you than a medical professional who is also a wife and mother?

Grab your copy now for yourself or as the ultimate gift to a friend or loved one.

About The Author
Dr Irina Webster
Started her medical career in 1987 after graduating from high school with distinctions. Irina always had an ambition to help others and thought medicine was a good area to pursue. She then enrolled in the Medical University of Archangelsk situated in North Russia, graduating in 1993.

Irina then started her internship at The Komi Republic Children's Hospital 1993 to 1994 where she studied to become a Pediatrician.

After passing her internship Irina started working as a doctor - Pediatrician

at the Women's and Children's hospital based in Syktyvkar; the capital city of the Komi Republic from 1994 to 2001.

During this time Irina continued to gain more qualifications and eventually became the foremost specialist in her area of medicine in the region.

As a part of her normal job as the leading specialist Irina also performed as a Medical Educator, teaching General Practitioners and nurses about Asthma and Allergy management in evening educational classes.

She also taught Educational Classes for the general public (about Asthma and Allergy management) especially for parents of children suffering from asthma.

Irina also wrote a weekly medical column for the local newspaper on women and children's health.

For most doctors doing all this would be enough but Irina had a driving ambition to further her medical knowledge so took a part time position in emergency medicine in 1997.

In 2001 Irina migrated to Australia after marrying an Australian and arriving with not much knowledge of English. Irina set about learning at an unprecedented rate and not only passed English at a professional level, but also completed two bridging courses for medical professionals from 2001-2003.

In January of 2003 she passed Australian Medical Council Exams and received medical registration in Australia.

From 2003 -2006 she has been working in The Australian Hospital System as a medical doctor were she has gained more knowledge and pursued her interest in Women and Children Health and General Practice medicine. Also during this time Irina has looked at both traditional and alternative medicine and now has a holistic approach to health.

Irina has now started a web site especially for women, where she covers a whole range of topics on Women's health. Where you can also get monthly medical updates and on going help from her with problems you may have in strict confidence.

Before Pregnancy and Preparation for Pregnancy

Calculation of Delivery Date
Development Stages During Your Pregnancy?

Changes During the First Trimester

Tiredness
A Simple Meditation/relaxation Technique You can Try:
Nausea and Vomiting
Frequent Urination
Weight Gain
Look after Your Thirst First!
Mind over Stomach!

What to Avoid and Which Medications to use during pregnancy


Effects of Smoking, Alcohol and Illegal Drugs on the Fetus

Bleeding During Early and Late Pregnancy

Self-help with Your Morning sickness

Risk Factors for Fetus Abnormalities: When Investigations are Needed
The Use of Anti-D in Pregnancy

Group B Streptococcus (GBS) in Pregnancy

Your Diet During Pregnancy
Explanation of Normal Labor and Caesarean Section

Evaluation of the Newborn: What does the 'Apgar Score' Mean?


Two to Tango: The father's Role During Pregnancy

P.S. Even if you have no plans to start a family, "Pregnancy From A to Z" makes a great gift for someone who does. Get your copy now!

P.S. Even if you have no plans to start a family, "Pregnancy From A to Z" makes a great gift for someone who does. Get your copy now!

Reviewed by I Shpanova on 2007-03-03
My Rate 4
Fantasic e book I got a lot out of it and it helped me understand my pregnancy. It helped me all the way to the birth of my beautiful little baby girl
Ira.

Reviewed by I Shpanova on 2007-03-03
My Rate 4
Fantasic e book I got a lot out of it and it helped me understand my pregnancy. It helped me all the way to the birth of my beautiful little baby girl
Ira.