Onto the Stage Ebook 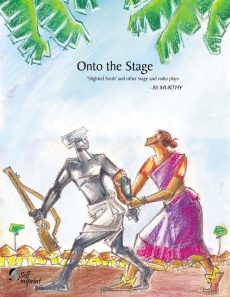 "Slighted Souls" is a poignant love story set in rural Telangana, beset with feudal exploitation of the downtrodden dalits. Besides forcing the dalits to toil in the fields as bonded labor without impunity, the land owning doras had no qualms in reducing the womenfolk of this ilk as sex slaves in the gadis.

And this unabated exploitative social order of the Nizam era left the dalits economically depressed, socially degraded and morally debased that was until the changing times in the independent India led to their armed rebellion against their oppressors that ironically pitted them against the State power and it is in this backdrop that Slighted souls takes one Onto the Stage.

"Men at work on Women at work" is a tragic-comic episode depicting the fallout of sexual harassment at the workplace in the Indian urban setting with its traditional cultural underpinnings.

"Castle of Despair", built on the slippery ground of man's innate urge for one-upmanship, portrays its facade of falsity on the grand stage of human tragedy.

The radio play, "Love on Hold", lends voice to the felt anxieties of a man and a woman as their old flame gets rekindled felt and the dilemmas of possession faced by the couple in a conservative cultural background.