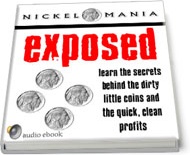 Hi, this is Gary Ambrose, and I want to thank you for taking the time to listen to this audio e-Book, NickelMania Exposed. And before I get started I just want to congratulate you on actually taking the time to listen. You can guarantee that there are going to be plenty of people who purchase the rights to listen to this who just have it sitting on their hard drive collecting virtual dust. So you're already ahead of the pack in terms of taking your business seriously and actually being willing to put in the time necessary to take your business to the next level. So I'm really glad you're listening, and I'm going to get right into things.

This audio e-Book focuses on a promotion I ran that started on November 16 called NickelMania, and hopefully, if you're listening to this, you saw part of it, but if you didn't, don't worry. I'll get into a little bit of how it worked later on in this audio. Basically what I want to do is explain to you the thought process that went into creating the NickelMania promotion, and that's really what this audio e-Book is about.

The NickelMania promotion itself was very successful, but really it's not going to help you all that much to just clone what I did and try to do it yourself, and I'll get into that, like I said, a little bit later. So basically what I want you to get out of this is getting the thought process down of how do you actually come up with a successful promotion and know that it's actually going to work when you put it into action.

So what I'm going to do right now is start off and just give you a little bit of the numbers behind what actually happened. On November 16, 2005, at midnight Pacific Time, is when I launched NickelMania, and I had a feeling it would do pretty well, and I had a couple goals in mind. My core goals were to add a few new subscribers to my list. I wanted to get a little bit of name recognition outside of my normal circle of influence, and, of course, I wanted to put a few nickels in my pocket.