My Book of Indoor Games Ebook 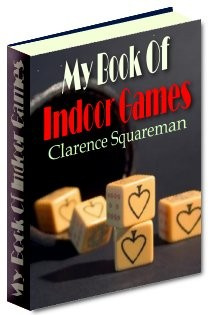 "Let the child imbibe in the full spirit of play. There is nothing like it to keep him on the path of health, right thinking and mind development."
That is the guiding purpose of the author. The reader will find in this ebook a collection of old and present day games. The student of Play has long realized that there are no new games, that all our games of today are built on the old timers.
The purpose of My Ebook of Indoor Games is to furnish amusement, entertainment and to be the means of sociability. So very often the question comes up-"What shall we do?" In many cases this ebook serves only as a reminder, the games and parlor tricks are well known but cannot be recalled at the critical moment. A combination, such as this, of the best of the old-fashioned games and a carefully compiled list of the games of today will furnish much help to the young in their search of entertainment and amusement.
But the ebook will be equally useful to grownups. The author has seen staid, respectable people play "Lubin Loo" with as much zest and spirit as the youngest group of children. All of us have played "Going to Jerusalem." The spirit must be there; there is nothing so contagious as the spirit of play.


TWIRL THE TRENCHER
This is a game which almost any number of children can play.
The players seat themselves in a circle, and each takes the name of some town, or flower, or whatever has been previously agreed upon. One of the party stands in the middle of the circle, with a small wooden trencher, or waiter, places it upon its edge, and spins it, calling out as he does so the name which one of the players has taken. The person named must jump up and seize the trencher before it ceases spinning, but if he is not very quick the trencher will fall to the ground, and he must then pay a forfeit. It is then his turn to twirl the trencher.
A very similar game to this is "My Lady's Toilet." The only difference is that each player must take the name of some article of a lady's dress, such as shawl, earring, brooch, bonnet, etc.

CROSS QUESTIONS AND CROOKED ANSWERS
To play this game it is best to sit in a circle, and until the end of the game no one must speak above a whisper.
The first player whispers a question to his neighbor, such as: "Do you like roses?" This question now belongs to the second player, and he must remember it.
The second player answers: "Yes, they smell so sweetly," and this answer belongs to the first player. The second player now asks his neighbor a question, taking care to remember the answer, as it will belong to him. Perhaps he has asked his neighbor, "Are you fond of potatoes?" and the answer may have been, "Yes, when they are fried!"
So that the second player has now a question and an answer belonging to him, which he must remember.
The game goes on until every one has been asked a question and given an answer, and each player must be sure and bear in mind that it is the question he is asked, and the answer his neighbor gives, which belong to him.
At the end of the game each player gives his question and answer aloud, in the following manner:
"I was asked: 'Do you like roses?' and the answer was: 'Yes, when they are fried!'" The next player says: "I was asked: 'Are you fond of potatoes?' and the answer was: 'Yes, they are very pretty, but they don't wear well.'"

ORANGES AND LEMONS
Two of the players join hands, facing each other, having agreed privately which is to be "Oranges" and which "Lemons." The rest of the party form a long line, standing one behind the other, and holding each other's dresses or coats. The first two raise their hands so as to form an arch, and the rest run through it, singing as they run:
"Oranges and Lemons,
Say the bells of St. Clement's;
You owe me five farthings,
Say the bells of St. Martin's;
When will you pay me?
Say the bells of Old Bailey.
I do not know,
Says the big bell of Bow.
Here comes a chopper to light you to bed!
Here comes a chopper to chop off your head!"

At the word "head" the hand archway descends, and clasps the player passing through at that moment; he is then asked in a whisper, "Oranges or Lemons?" and if he chooses "oranges," he is told to go behind the player who has agreed to be "oranges" and clasp him round the waist.
The players must be careful to speak in a whisper, so that the others may not know what has been said.
The game then goes on again, in the same way, until all the children have been caught and have chosen which they will be, "oranges" or "lemons." When this happens, the two sides prepare for a tug-of-war. Each child clasps the one in front of him tightly and the two leaders pull with all their might, until one side has drawn the other across a line which has been drawn between them.

MUSICAL CHAIRS OR GOING TO JERUSALEM
This game must be played in a room where there is a piano.
Arrange some chairs, back to back, in the center of the room, allowing one chair less than the number of players. Some one begins to play a tune, and at once the players start to walk or run round the chairs, to the sound of the music.
When the music stops, each player must try to find a seat, and as there is one chair short, some one will fail to do so, and is called "put." He must carry a chair away with him, and the game goes on again until there is only one person left in, with no chair to sit upon. This person has won the game.

THE TRAVELER'S ALPHABET
The players sit in a row and the first begins by saying, "I am going on a journey to Athens," or any place beginning with A. The one sitting next asks, "What will you do there?" The verbs, adjectives, and nouns used in the reply must all begin with A; as "Amuse Ailing Authors with Anecdotes." If the player answers correctly, it is the next player's turn; he says perhaps: "I am going to Bradford." "What to do there?" "To Bring Back Bread and Butter." A third says: "I am going to Constantinople." "What to do there?" "To Carry Contented Cats." Any one who makes a mistake must pay a forfeit.

THE FAMILY COACH
This is a very good old game, and is most amusing if you can find some one who is a good story-teller.
The players sit in a circle and every one, except the story-teller, takes the name of some part of a coach or its equipments; for instance, door, step, wheels, reins, box-seat, and so on.
When all are ready, the story-teller begins a tale about an old coach and what happened to it, how it went on a journey, came to grief, was mended, and started off again. The story should be told fluently, but not too quickly. Every time any part of the coach is mentioned, the player who has taken that name must rise from his seat and then sit down again.
Whenever "the coach" is mentioned, all the players, with the exception of the story-teller, must rise. Any one who fails to keep these rules must pay a forfeit.