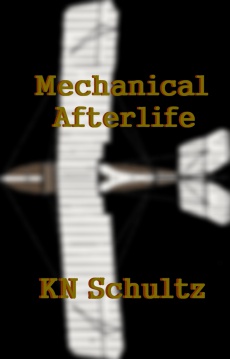 In a dark brooding world after a great cataclysm, society hangs barely by loose threads amongst savagelands. The cities are isolated, walled, and mechanical driven. Travel amongst them is done by infested river waters.

Ratchet Jack, a dazed and unnerved dock worker, survives a vicious attack by the river demons, but feels alien to the world around him. Looking to cross the river to the other side of town after bridge curfew, he finds himself seeking the aid of his waitress friend, Osana.

Through the darkening streets, she leads him to a recluse inventor and frequent after dark river smuggler, Nimble Tom.

Atop Nimble Tom's apartment complex, Rachet Jack finds the answer to his problem to cross the dangerous river. Affixed to a launching mechanism that resembles a much larger version of a simple child's toy, a wooden glider offers passage.

Determined to find a new station in life for herself across the river, Osana joins Ratchet Jack as Nimble Tom launches them high into the air to the mercy of the winds and water below.