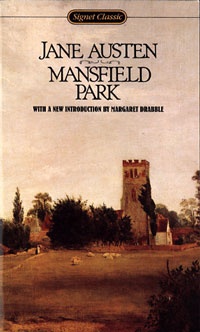 CHAPTER I
About thirty years ago Miss Maria Ward, of Huntingdon, with only seven thousand pounds, had the good luck to captivate Sir Thomas Bertram, of Mansfield Park, in the county of Northampton, and to be thereby raised to the rank of a baronet's lady, with all the comforts and consequences of an handsome house and large income. All Huntingdon exclaimed on the greatness of the match, and her uncle, the lawyer, himself, allowed her to be at least three thousand pounds short of any equitable claim to it. She had two sisters to be benefited by her elevation; and such of their acquaintance as thought Miss Ward and Miss Frances quite as handsome as Miss Maria, did not scruple to predict their marrying with almost equal advantage. But there certainly are not so many men of large fortune in the world as there are pretty women to deserve them. Miss Ward, at the end of half a dozen years, found herself obliged to be attached to the Rev. Mr. Norris, a friend of her brother-in-law, with scarcely any private fortune, and Miss Frances fared yet worse. Miss Ward's match, indeed, when it came to the point, was not contemptible: Sir Thomas being happily able to give his friend an income in the living of Mansfield; and Mr. and Mrs. Norris began their career of conjugal felicity with very little less than a thousand a year. But Miss Frances married, in the common phrase, to disoblige her family, and by fixing on a lieutenant of marines, without education, fortune, or connexions, did it very thoroughly. She could hardly have made a more untoward choice. Sir Thomas Bertram had interest, which, from principle as well as pride--from a general wish of doing right, and a desire of seeing all that were connected with him in situations of respectability, he would have been glad to exert for the advantage of Lady Bertram's sister; but her husband's profession was such as no interest could reach; and before he had time to devise any other method of assisting them, an absolute breach between the sisters had taken place. It was the natural result of the conduct of each party, and such as a very imprudent marriage almost always produces. To save herself from useless remonstrance, Mrs. Price never wrote to her family on the subject till actually married. Lady Bertram, who was a woman of very tranquil feelings, and a temper remarkably easy and indolent, would have contented herself with merely giving up her sister, and thinking no more of the matter; but Mrs. Norris had a spirit of activity, which could not be satisfied till she had written a long and angry letter to Fanny, to point out the folly of her conduct, and threaten her with all its possible ill consequences. Mrs. Price, in her turn, was injured and angry; and an answer, which comprehended each sister in its bitterness, and bestowed such very disrespectful reflections on the pride of Sir Thomas as Mrs. Norris could not possibly keep to herself, put an end to all intercourse between them for a considerable period.

Their homes were so distant, and the circles in which they moved so distinct, as almost to preclude the means of ever hearing of each other's existence during the eleven following years, or, at least, to make it very wonderful to Sir Thomas that Mrs. Norris should ever have it in her power to tell them, as she now and then did, in an angry voice, that Fanny had got another child. By the end of eleven years, however, Mrs. Price could no longer afford to cherish pride or resentment, or to lose one connexion that might possibly assist her. A large and still increasing family, an husband disabled for active service, but not the less equal to company and good liquor, and a very small income to supply their wants, made her eager to regain the friends she had so carelessly sacrificed; and she addressed Lady Bertram in a letter which spoke so much contrition and despondence, such a superfluity of children, and such a want of almost everything else, as could not but dispose them all to a reconciliation. She was preparing for her ninth lying-in; and after bewailing the circumstance, and imploring their countenance as sponsors to the expected child, she could not conceal how important she felt they might be to the future maintenance of the eight already in being. Her eldest was a boy of ten years old, a fine spirited fellow, who longed to be out in the world; but what could she do? Was there any chance of his being hereafter useful to Sir Thomas in the concerns of his West Indian property? No situation would be beneath him; or what did Sir Thomas think of Woolwich? or how could a boy be sent out to the East?

The letter was not unproductive. It re-established peace and kindness. Sir Thomas sent friendly advice and professions, Lady Bertram dispatched money and baby-linen, and Mrs. Norris wrote the letters.

Such were its immediate effects, and within a twelvemonth a more important advantage to Mrs. Price resulted from it. Mrs. Norris was often observing to the others that she could not get her poor sister and her family out of her head, and that, much as they had all done for her, she seemed to be wanting to do more; and at length she could not but own it to be her wish that poor Mrs. Price should be relieved from the charge and expense of one child entirely out of her great number. "What if they were among them to undertake the care of her eldest daughter, a girl now nine years old, of an age to require more attention than her poor mother could possibly give? The trouble and expense of it to them would be nothing, compared with the benevolence of the action." Lady Bertram agreed with her instantly. "I think we cannot do better," said she; "let us send for the child."

Sir Thomas could not give so instantaneous and unqualified a consent. He debated and hesitated;--it was a serious charge;-- a girl so brought up must be adequately provided for, or there would be cruelty instead of kindness in taking her from her family. He thought of his own four children, of his two sons, of cousins in love, etc.;--but no sooner had he deliberately begun to state his objections, than Mrs. Norris interrupted him with a reply to them all, whether stated or not.

"My dear Sir Thomas, I perfectly comprehend you, and do justice to the generosity and delicacy of your notions, which indeed are quite of a piece with your general conduct; and I entirely agree with you in the main as to the propriety of doing everything one could by way of providing for a child one had in a manner taken into one's own hands; and I am sure I should be the last person in the world to withhold my mite upon such an occasion. Having no children of my own, who should I look to in any little matter I may ever have to bestow, but the children of my sisters?-- and I am sure Mr. Norris is too just--but you know I am a woman of few words and professions. Do not let us be frightened from a good deed by a trifle. Give a girl an education, and introduce her properly into the world, and ten to one but she has the means of settling well, without farther expense to anybody. A niece of ours, Sir Thomas, I may say, or at least of_yours_, would not grow up in this neighbourhood without many advantages. I don't say she would be so handsome as her cousins. I dare say she would not; but she would be introduced into the society of this country under such very favourable circumstances as, in all human probability, would get her a creditable establishment. You are thinking of your sons-- but do not you know that, of all things upon earth, _that_ is the least likely to happen, brought up as they would be, always together like brothers and sisters? It is morally impossible. I never knew an instance of it. It is, in fact, the only sure way of providing against the connexion. Suppose her a pretty girl, and seen by Tom or Edmund for the first time seven years hence, and I dare say there would be mischief. The very idea of her having been suffered to grow up at a distance from us all in poverty and neglect, would be enough to make either of the dear, sweet-tempered boys in love with her. But breed her up with them from this time, and suppose her even to have the beauty of an angel, and she will never be more to either than a sister."