Loyal To A Degree Ebook

A Novel Based On A True Story
Category: Action, Fiction, Novels 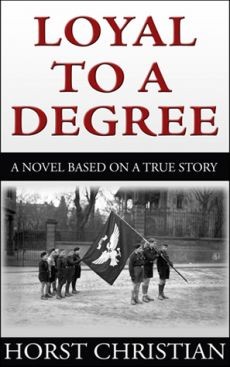 The book is based on a true story about the events that took place in a young boy's life in Germany in the days before Berlin fell.

Karl Veth is only 14 years old and a member of the Hitler Jungen (Hitler Youth), which German law requires. As the assitant of an evacuation camp in Poland, he is given orders to see to the safe transport of 120 boys under the age of 12 from the camp back to Berlin to be reunited with their families.

Once he is back in Berlin, Karl is then ordered to act as a guide for SS demolition commandos in the subway tunnels as the Russian army advances on the city.

Every day, Karl witnesses death and destruction all around him and as he does, his loyalty begins to waver. He has been drafted to fight for a cause he does not understand and he is expected to fight like a soldier. He reaches a point where he must choose whether he wants to save his own life or die fighting.