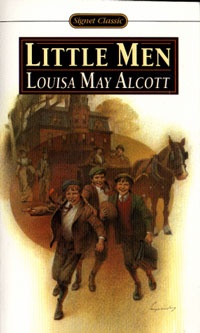 TO
FREDDY AND JOHNNY,
THE LITTLE MEN
TO WHOM SHE OWES SOME OF THE BEST AND HAPPIEST
HOURS OF HER LIFE,
THIS EBOOK IS GRATEFULLY DEDICATED
BY THEIR LOVING
"AUNT WEEDY"

"Please, sir, is this Plumfield?" asked a ragged boy of the man who opened the great gate at which the omnibus left him.

"Mr. Laurence. I have got a letter for the lady."

"All right; go up to the house, and give it to her; she'll see to you, little chap."

The man spoke pleasantly, and the boy went on, feeling much cheered by the words. Through the soft spring rain that fell on sprouting grass and budding trees, Nat saw a large square house > before him a hospitable-looking house, with an old-fashioned porch, wide steps, and lights shining in many windows. Neither curtains nor shutters hid the cheerful glimmer; and, pausing a moment before he rang, Nat saw many little shadows dancing on the walls, heard the pleasant hum of young voices, and felt that it was hardly possible that the light and warmth and comfort within could be for a homeless "little chap" like him.

"I hope the lady will see to me," he thought, and gave a timid rap with the great bronze knocker, which was a jovial griffin's head.

A rosy-faced servant-maid opened the door, and smiled as she took the letter which he silently offered. She seemed used to receiving strange boys, for she pointed to a seat in the hall, and said, with a nod:

"Sit there and drip on the mat a bit, while I take this in to missis."

Nat found plenty to amuse him while he waited, and stared about him curiously, enjoying the view, yet glad to do so unobserved in the dusky recess by the door.

The house seemed swarming with boys, who were beguiling the rainy twilight with all sorts of amusements. There were boys everywhere, "up-stairs and down-stairs and in the lady's chamber," apparently, for various open doors showed pleasant groups of big boys, little boys, and middle-sized boys in all stages of evening relaxation, not to say effervescence. Two large rooms on the right were evidently schoolrooms, for desks, maps, blackboards, and ebooks were scattered about. An open fire burned on the hearth, and several indolent lads lay on their backs before it, discussing a new cricket-ground, with such animation that their boots waved in the air. A tall youth was practising on the flute in one corner, quite undisturbed by the racket all about him. Two or three others were jumping over the desks, pausing, now and then, to get their breath and laugh at the droll sketches of a little wag who was caricaturing the whole household on a blackboard.

In the room on the left a long supper-table was seen, set forth with great pitchers of new milk, piles of brown and white bread, and perfect stacks of the shiny gingerbread so dear to boyish souls. A flavor of toast was in the air, also suggestions of baked apples, very tantalizing to one hungry little nose and stomach.

The hall, however, presented the most inviting prospect of all, for a brisk game of tag was going on in the upper entry. One landing was devoted to marbles, the other to checkers, while the stairs were occupied by a boy reading, a girl singing a lullaby to her doll, two puppies, a kitten, and a constant succession of small boys sliding down the banisters, to the great detriment of their clothes and danger to their limbs.

So absorbed did Nat become in this exciting race, that he ventured farther and farther out of his corner; and when one very lively boy came down so swiftly that he could not stop himself, but fell off the banisters, with a crash that would have broken any head but one rendered nearly as hard as a cannon-ball by eleven years of constant bumping, Nat forgot himself, and ran up to the fallen rider, expecting to find him half-dead. The boy, however, only winked rapidly for a second, then lay calmly looking up at the new face with a surprised, "Hullo!"

"Hullo!" returned Nat, not knowing what else to say, and thinking that form of reply both brief and easy.

"Are you a new boy?" asked the recumbent youth, without stirring.

"Mine's Tommy Bangs. Come up and have a go, will you?" and Tommy got upon his legs like one suddenly remembering the duties of hospitality.

"Guess I won't, till I see whether I'm going to stay or not," returned Nat, feeling the desire to stay increase every moment.

"I say, Demi, here's a new one. Come and see to him;" and the lively Thomas returned to his sport with unabated relish.

At his call, the boy reading on the stairs looked up with a pair of big brown eyes, and after an instant's pause, as if a little shy, he put the ebook under his arm, and came soberly down to greet the new-comer, who found something very attractive in the pleasant face of this slender, mild-eyed boy.

"Have you seen Aunt Jo?" he asked, as if that was some sort of important ceremony.

"I haven't seen anybody yet but you boys; I'm waiting," answered Nat.

"Did Uncle Laurie send you?" proceeded Demi, politely, but gravely.

"He is Uncle Laurie; and he always sends nice boys."

Nat looked gratified at the remark, and smiled, in a way that made his thin face very pleasant. He did not know what to say next, so the two stood staring at one another in friendly silence, till the little girl came up with her doll in her arms. She was very like Demi, only not so tall, and had a rounder, rosier face, and blue eyes.

"This is my sister, Daisy," announced Demi, as if presenting a rare and precious creature.

The children nodded to one another; and the little girl's face dimpled with pleasure, as she said affably:

"I hope you'll stay. We have such good times here; don't we, Demi?"

"Of course, we do: that's what Aunt Jo has Plumfield for."

"It seems a very nice place indeed," observed Nat, feeling that he must respond to these amiable young persons.

"It's the nicest place in the world, isn't it, Demi?" said Daisy, who evidently regarded her brother as authority on all subjects.

"No, I think Greenland, where the icebergs and seals are, is more interesting. But I'm fond of Plumfield, and it is a very nice place to be in," returned Demi, who was interested just now in a ebook on Greenland. He was about to offer to show Nat the pictures and explain them, when the servant returned, saying with a nod toward the parlor-door:

"I'm glad; now come to Aunt Jo." And Daisy took him by the hand with a pretty protecting air, which made Nat feel at home at once.