Legend of the Undead Santa Ebook 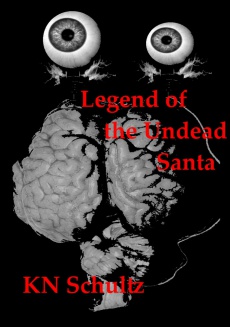 During the sweltering unadulterated drunken mayhem of his yearly summer vacation with his magical reindeer, Old Man Santa falls victim to the gnashing murderous jaws of a very disgruntled and provoked shark. Torn to bits and spewed back into the ocean, the jolly old fat man and his companions wash ashore to be reassembled under the strange voodoo practices of a rogue witch doctor.

Meanwhile, a deranged yeti, deformed to look like a child's snowman, conquers the North Pole. He steals Mrs. Kringle, Santa's latest and luscivious young bride and enslaves the elves with their fabled workshop to make disgusting presents to spread worldwide dismay and dischord.

Old Man Kringle sends one of his undead reindeer to recruit him a deviant bloodthirsty army to aid him in the revenge against the monster that had him murdered and turned into a slobbering and festering brain eating corpse.

To the North Pole Old Man Santa takes his army to discover the truth, a jealous yeti stole his wife and Christmas. Through the Arctic into Siberia, the battle wages until the Undead Santa wins and saves Christmas.