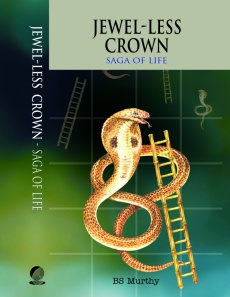 This fascinating saga of life exemplifies the material raise and moral fall of Gautam and Sneha and also the poignant end of the latter and the spiritual rise of the former that is after the fall. Besides, this piquant story depicts the tragic life of their son Suresh Prabhu and his eventual redemption through love for and of Vidya. If ever chapter headings could be pointers to the story of a novel, as it unfolds, perhaps this is the case.

Book One, Artha and Kama, is about conflict and resolution arising out of ambition and achievement, intrigue and betrayal, compulsion and compromise, sleaze and scandal, trial and sentence and regret and remorse spread over eighteen chapters - Party Gone Sour, Trauma at Tihar, Mind of the Maligned, Twist at Tis-Hazari, Trial in Camera, Dilemma of Qualms, Moment of Reckoning, End within end, Vestiges of Prestige, High on Rebound, Bellows of Delhi, Dicing with Life, Spidering Spadework, Loss to Order, Daring the Fate, victims of Deceit, baring the Soul and Garland of Guilt.

Book Two, Dharma and Moksha, portrays the possibilities of life through repentance and recompense, hope and love, and compassion and contribution leading to the spirituality of materialism in twelve chapters - Bliss of Being, Collage of Crime, Domain of the Devil, Renaissance of Life, Sprouts of Love, Despair of Hope, Turn at the Bend, Amity of Empathy, Day to Remember, Spirituality of Materialism, Sense of Reincarnation and Epilogue.

Read on - That New year's Eve, all the nouveau riche of New Delhi seemed to have gathered at the Misty Nest in their ..