In the South, the Wheel of Fire – The Fourth Book of Evlampia Ebook

In the South, the Wheel of Fire – The Fourth Book of Evlampia
Category: Fiction, History 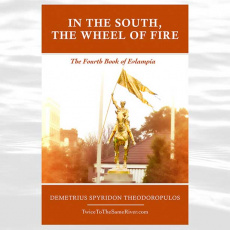 +$1
Title: In the South, the Wheel of Fire – The Fourth Book of Evlampia
Author: Demetrios S. Theodoropoulos, MD, DSc
Description:

Short description: Before they become events, revolutions exist in the minds of men; and it is therein that they survive long after their political demise. Such is the nature of ideas, but when one is brought up Graecian, an idea never comes alone: she is the property of a goddess and the reflection of an archetype; she looks like a star, a precious stone or an element; she becomes a certain woman - one grows up with her. Such exchanges are not without provisions. Gods incarnate, demigods, reincarnate; and the civil servants of revolutionary states reinvent themselves by their own means: ambiguity, dissimulation and a knack for weathering logical contradictions.

This e-book is available for purchase for $8.00 in PDF, EPUB (iBooks, Kobo, Nook, Android, Sony, and other eReaders), and MOBI (Amazon Kindle Devices) format.

Short excerpt from Chapter 1 - Permanent revolution and revolving permanence: I. One morning in the summer of 1789, the 15th of July, the benevolent King Louis woke up to tumult of the street. The previous day had been recorded by the unfortunate monarch as yet another undistinguished sunrise, another sunset, one more bead on a long string of boring days. In the King's journal, the sole entry under the 14th of July, 1789, what we now celebrate every year as the world-shattering Bastille Day, was but one word: "Rien." Whether the King was misinformed or whether we are misled, remains to be seen. But we do know that the already doomed king asked La Rochefoucauld whether the noise he was hearing was not the sound of a revolt. He asked, only to receive the now famous answer: "Non Monsieur, c'est la revolution."

Much has been made of La Rochefoucauld's response. A lot has been presumed. His quiet reply is usually portrayed as an irony, as if he had already known what was about to happen, or as if his own understanding of the words revolt and revolution could be the same as ours. But words change. Experts often describe the Revolution as a process whose significance is of a different order from a revolt, but La Rochefoucauld's answer may have been meant in the exact opposite sense from what is construed by contemporary historians. The reassuring tone of that famous sentence may have in fact been in keeping with what he actually meant to say and nothing more. Maybe he said less than the historian wants to understand.