How To Make Money Without Leaving Your House! Ebook

How To Make Money Without Leaving Your House!
Category: E-Business, Home Business 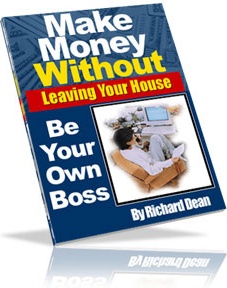 +$5
Title: How To Make Money Without Leaving Your House!
Author: Richard Dean
Description:
An Insider's Guide

Be Your Own Boss!

OVERVIEW OF Make Money Without Leaving Your house

When Ronald Reagan took the oath of office for the Presidency in January of 1981, one of his earliest pledges was to make life a little easier for the small business person. Reagan believed that America was founded on the backs of intrepid folks who took a chance and gambled everything they had on a chance to start fresh. Small business today is the embodiment of that idea.

Less regulation and lower taxes during the former California governors first term in office sent the number of small business formations skyward and the industry, despite increased taxes and regulation, has never looked back. Today, as much as ever, there are outstanding opportunities in the small business market.

Think about it. Big business puts out a controlled product that appeals to the masses. When selling nationwide, little attention is paid to particular regional differences. Small business fills this void. Its not necessary, in an environment of lower overhead and more flexibility, to have a product that necessarily appeals to the masses. You might produce T-shirts and apparel with local slogans and insignia on them out of your own home. This product will likely appeal to the locals and certainly may have some fascination for tourists, too. Its not something a major company is likely to fashion because of its limited audience attraction. But you dont need to sell as many units to operate a successful small business.

There are numerous examples of small businesses having local flavor that became an overnight sensation nationally. Ben and Jerrys ice cream was a Vermont tradition that suddenly caught on big everywhere.
Numerous franchises and grocery distribution outlets later, the original owners are ready to cash in big time!

Perhaps you have that kind of ambition. It may be that your idea for a home-based business may have a national market. Its wiser to start smaller if you dont have a lot of initial capital. If you have access to capital, thats a different story. Wayne Huzienga, owner of the Blockbuster video stores, borrowed heavily to finance his outlets. The first store didnt make any money. But he believed in his idea to have numerous video copies available for two or three nights at a time. He thought people would pay a little more for this kind of convenience. The first ten stores didnt make any money. Neither did the first 100 stores. But Huzienga knew Americans. Suddenly the profits started to come and Blockbuster has developed into a commercial trademark for most shopping outlets in this country.

But you dont have to make it that big to be a financial success. You can make thousands of dollars a week from your own home without having to invest very much capital for business start-up.