How To Get Reprint Rights To Products Without Paying A Dime! Ebook

How To Get Reprint Rights To Products Without Paying A Dime!
Category: E-Marketing 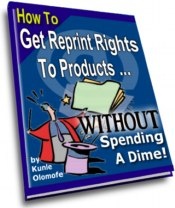 +$5
Title: How To Get Reprint Rights To Products Without Paying A Dime!
Author: Kunle Olomofe
Description:

A couple of days ago, I closed a deal with Collin Almeida of reprint-rights.com using the same techniques in this report.

I got him to hand over $794 in EXACT reprint rights plus $9,995 in marketing rights to a set of products from Dan Kennedy of http://www.dankennedy.com.

All this came to savings of exactly $10,789 in real CASH VALUE, FREE. Yes, that means without actually paying one red cent!

A couple of days earlier I got a question about the same thing and revealed in few lines exactly how I get reprint rights to products others don't have the rights to, I got this back in reply...

"Hi Kunle, Thank you for your answer and for the update of your ebook (including the reprint report)! And thank you for your helpful and clarifying comments on how you get reprint rights! You're really good at this! And you could easily create a ebook or a complete course on it!"
Klaus Dahl
http://www.klausdahl.com

Now, I'm far from creating a course on this;-), You don't need a course on
it, it's very simple. Too simple to write a whole course anyway, so you get
exactly what will benefit you.

What you'll get instead is...

A special report with FULL reprint rights so you can sell it at the full price and keep all the money, give it away FREE to get new sign ups to your ezine, or use it as a very valuable and unique free bonus with your own products to get YOUR prospects to BUY something from YOU!

This is a hot report with information that can save your prospects virtually tens of thousands of dollars IF they use it well! And I bet they'll just LOVE you for showing this to them!

Now, let me be totally honest with you...

This special report can save you a load of money if you find the right people to deal with. However I won't kid you around or B.S. you like most people would on this. I'll be straight up front and tell you -- nothing is ever 100% guaranteed to work ALL of the time.

Anyone claiming that must be a magician or...

Listen. Super-Computers (talk much less of normal everyday PC's) break down or come up with a glitch every once in a few years. How many times has YOUR computer "hung" on you?

Bank ATM's eat up your credit card or chuck out more or less money than you asked for, or don't even chuck any money out at all and instead chuck out your plastic card and ask you to kindly take a hike -- "Your faulty card (which really isn't faulty) can't be processed at this moment!"Has that ever happened with you?

It's just part of that thing called -- life. In Life, nothing is ever PERFECT or 100% guaranteed to work without a hitch (not that I know of anyways;-)

So, in the same light, what I'm about to tell you now has worked for me in closing two deals recently and getting EXPENSIVE resale/reprint/marketing rights totaling $13,789 in real money that I would have had to actually cough up IF I didn't use the method you'll see below.

Last year it worked to get me close to $3,000 or so in reprint rights "savings";-) And, I will still keep using it probably till retirement. It works.

Still, the same method in this report has flopped for me twice recently. I met two people and used it with them. I could have sworn they'd snap up my offer within the twinkling of an eye!But, people can be unpredictable.

They didn't exactly refuse, but they didn't reply saying "Yes! oh yes!" either. You'll see later why this shouldn't even bother you one bit.

For now, I want you to know that I did not invent this, neither did I create any NEW system to use it, the whole idea you'll see about now can be based in a simple theory.

Ted Nicholas uses this technique to close off millions of dollars in deals, sales, subscriptions, you name it!

Yes, someone actually paid that much to hear the following advice in less than 130-words! What did Ted advise for fifteen-hundred US dollars? You'll find out in the report.

Since that day (sometime in September 1992), Ted Nicholas made direct marketing history with those 13 words and has since put several million dollars in people's pockets who just went straight ahead and used it.

Did it work for them all of the time? Probably not. But if you're wondering if it worked majority of the time and saved or made someone a great deal of money, I can say from personal experience. It works.

So back to my special report, what you'll be getting, and how you can get it. It's simple and really I won't drag this out much longer. There are only three major benefits from reading this report.

Do these sound like cash-benefits YOU want for YOUR business?

If you said YES to that, lets get to how the report will be delivered to you so you can use the info -- right away. I've put this information in PDF so that even if you're a PC or MAC user, you too can see it immediately!

How can you get instant access - 3 minutes from now?

PS:
Don't bother with this report if you equate number of pages or amount of text with value and price. Please. This simple information is the exact info I use to close $10,000 deals -- over breakfast. No unnecessary fluff. You get what you need to make it work. That's it. In my case, less is more.;-)

PS:
Don't bother with this report if you equate number of pages or amount of text with value and price. Please. This simple information is the exact info I use to close $10,000 deals -- over breakfast. No unnecessary fluff. You get what you need to make it work. That's it. In my case, less is more.;-)