How To Get Paid To Watch TV Ebook

How To Get Paid To Watch TV
Category: Home Business, How To 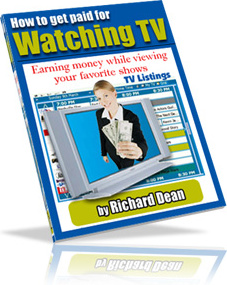 +$5
Title: How To Get Paid To Watch TV
Author: Richard Dean
Description:
Earn money while viewing Your favorite shows!

"Grab The Chips & Soda, Curl Up On The Couch And Lets Make Some Money Watching TV"

"Making money watching TV is as simple as changing the channels!"

Television pounced upon the scene during one of the worst economic periods in our country's history- the Great Depression. As a result, TV's introduction to a potential viewing public went largely unnoticed. People had more than enough to do trying to provide for their families.

Despite that timing, a few people had a chance to view the future. That's exactly what they thought TV was, but even they could not have dreamed of the successful industry television has become. With the advent of cable television, there are dozens of stations now competing for the viewer and showing an extraordinary range of programming from week to week.

Early on, there was only one station. NBC (The National Broadcasting Company) was the first to broadcast programs a few hours a week on the television set. It's hard to imagine TV today on such a limited basis, but every industry has to start somewhere. Within a couple of years, there were a number of stations joined NBC and programming was expanded.

Television flourished in the fifties and new programming was the rage of the industry. Each year many of us looked forward to the introduction of new shows to watch along with our favorites held over from the previous programming year. Family gatherings around the TV set were common as more and more households obtained its own set.

Today, 100's of millions have a television sets, not to mention a (VCR) (DVD) (TV Recorder Box), all to keep up with the latest offerings from a seemingly infinite number of channels. Satellite dishes have expanded viewing capability well past our normal limits.

What does this mean to you? Simply put, here are your dollar-making opportunities. The television industry is already large, yet it is experiencing its most dramatic growth ever, thanks to the expanding cable television market. With growth comes needs- needs you could fulfill. If you watch TV a lot, and enjoy it, this chance is for you.

These opportunities are unlimited and it doesn't matter where you reside or how far you progressed in school. No matter where you live, there is a cable television company with the ability to hook a television up to its service. Cable is ready, willing and expanding - and its profits show it. The government has recently focused on this industry simply because of the outrageous amounts of money it seems to be making. With cable advertising income closing in on the $4 billion dollar mark, this is an industry that hides no longer.

In fact, it has been shown that cable TV watchers tend to buy more goods and services than non-cable TV subscribers. Thus, companies are clamoring to get their advertising pitch out to these viewers, hoping for the best. It's not just the Home Shopping Network that's doing well, but advertisers on all shows who are benefiting from this marketing boom. People who can afford cable television monthly rates are the ones who tend to consume more products anyway- and businesses know this

You're ready! You're in the right frame of mind for this task, so let's set up your TV Business.

What have you got to lose?

Grab some fresh batteries for the remote and start making that money.

Get this Insider's Handbook To: "Get Paid To Watch TV" Today

You have absolutely nothing to lose and everything to gain.

This booklet is intended to introduce you to a variety of ideas that can give you the opportunity to earn money while sitting in front of your television. While it may sound like a gimmick, there are very real possibilities to generate dollars if you are willing to give it a try!
Its not necessarily easy work. Theres a lot of effort required to get your operation up and running. But dedication to the task and motivation towards the end goal of being in business for yourself should provide substantial impetus for you to launch this project.
It often comes down to using time wisely and if you like to watch television, why not look for ways to do what you enjoy and make money at the same time? There are numerous chances in this world to work in a field you enjoy and be successful at it! All it takes is a bit of determination, organization and a belief in yourself.
Most people have the ability to make a business of their own work. But for various reasons they dont try or they make the attempt, but believe they are going to fail. Very often, they fulfill their own self-prophecy.
They choose to listen to the negative influences all the reasons why the business would fail instead of listening to all the arguments as to why it can succeed.
Theres no reason why any business you try shouldnt be successful. But the belief in yourself must overshadow the things that can and will go wrong. By focusing on the things you do right and building on them, your business can provide you with the kind of income you want while letting you maintain the freedom of being your own boss.
It all comes down to having the right attitude. If you truly feel your business can be a smashing success, it will be! This is because youll look for the ideas that work well for the business, discard the ones that arent working and essentially try to understand the formula for success.