How To Find WORK WITH THE FEDERAL GOVERNMENT Ebook

How To Find WORK WITH THE FEDERAL GOVERNMENT
Category: Jobs 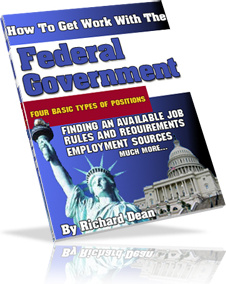 +$5
Title: How To Find WORK WITH THE FEDERAL GOVERNMENT
Description:

"Still Working Some Holidays? Then Your Not Working For The Goverment"

"Be entitled to all rights and privileges of Government Employment."

There is no larger employer in the world than the United States Government. Positions are available on a near regular basis, despite recent cutbacks. Not only are there opportunities domestically, but employment outside the United States is a possibility on military bases, overseas embassies and various departments of defense and state agencies.

You will have to become familiar with a whole new employment language. This is the federal government, after all. A special occupational classification system exists which determines pay and job grades.


There are four basic types of positions within the federal government:!

As you can see, these are stepping-stone types of positions. This is the way the federal government works. Within this structure is a pre-programmed format within which one moves slowly up the ranks. There is little room for diversity and flexibility within this framework, but there is a certain amount of stability and security the farther along you go. There is also the chance for part-time work on either a temporary or term basis and that information would be listed along with the posting of the position itself.

The controlling organization is the Office of Personnel Management (OPM). OPM fills the available federal positions with few exceptions. They are the clearing house for applications to which they compare your qualifications with the listed positions. Or, if your application is to be put on record only OPM reviews it with an eye towards agency suitability and places your name on a list for further reference as positions come up.

When a job opening then becomes available, this list is consulted for potential names to be sent directly to the department looking for workers. A number of factors are used in qualifying people and your success will depend as much on your experience as it will on compensation available, number of people applying for the position; and number of openings. OPM's lists do fill up and there are times when they are so plentiful they take no further applications They then invite you to contact them at a later date.

Your best bet is to contact the Federal Job Information Center

You're ready! You're in the right frame of mind for this task, so let's make the call.

What have you got to lose?


Get this Insider's Handbook To: "Federal Government Jobs" Today

You have absolutely nothing to lose and everything to gain.