How To Do It Ebook

How To Do It
Category: How To 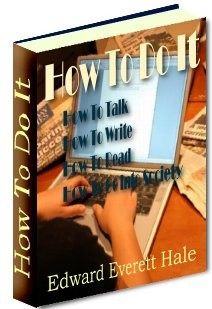 +$5
Title: How To Do It
Author: Edward Everett Hale
Description:

It may be observed that there are thirty-four of them. They make up a very nice set, or would do so if they belonged together. But, in truth, they live in many regions, not to say countries. None of them are too bright or too stupid, only one of them is really selfish, all but one or two are thoroughly sorry for their faults when they commit them, and all of them who are good for anything think of themselves very little. There are a few who are approved members of the Harry Wadsworth Club. That means that they "look up and not down," they "look forward and not back," they "look out and not in," and they "lend a hand." These papers were first published, much as they are now collected, in the magazine "Our Young Folks," and in that admirable weekly paper "The Youth's Companion," which is held in grateful remembrance by a generation now tottering off the stage, and welcomed, as I see, with equal interest by the grandchildren as they totter on. From time to time, therefore, as the different series have gone on, I have received pleasant notes from other young people, whose acquaintance I have thus made with real pleasure, who have asked more explanation as to the points involved. I have thus been told that my friend, Mr. Henry Ward Beecher, is not governed by all my rules for young people's composition, and that Miss Throckmorton, the governess, does not believe Archbishop Whately is infallible. I have once and again been asked how I made the acquaintance of such a nice set of children. And I can well believe that many of my young correspondents would in that matter be glad to be as fortunate as I.

Perhaps, then, I shall do something to make the little ebook more intelligible, and to connect its parts, if in this introduction I tell of the one occasion when the dramatis personae met each other; and in order to that, if I tell how they all met me.

First of all, then, my dear young friends, I began active life, as soon as I had left college, as I can well wish all of you might do. I began in keeping school. Not that I want to have any of you do this long, unless an evident fitness or "manifest destiny" appear so to order. But you may be sure that, for a year or two of the start of life, there is nothing that will teach you your own ignorance so well as having to teach children the few things you know, and to answer, as best you can, their questions on all grounds. There was poor Jane, on the first day of that charming visit at the Penroses, who was betrayed by the simplicity and cordiality of the dinner-table--where she was the youngest of ten or twelve strangers--into taking a protective lead of all the conversation, till at the very last I heard her explaining to dear Mr. Tom Coram himself,--a gentleman who had lived in Java ten years,--that coffee-berries were red when they were ripe. I was sadly mortified for my poor Jane as Tom's eyes twinkled. She would never have got into that rattletrap way of talking if she had kept school for two years. Here, again, is a capital letter from Oliver Ferguson, Asaph's younger brother, describing his life on the Island at Paris all through the siege. I should have sent it yesterday to Mr. Osgood, who would be delighted to print it in the Atlantic Monthly, but that the spelling is disgraceful. Mr. Osgood and Mr. Howells would think Oliver a fool before they had read down the first page. "L-i-n, lin, n-e-n, nen, linen." Think of that! Oliver would never have spelled "linen" like that if he had been two years a teacher. You can go through four years at Harvard College spelling so, but you cannot go through two years as a schoolmaster.

Well, I say I was fortunate enough to spend two years as an assistant schoolmaster at the old Boston Latin School,--the oldest institution of learning, as we are fond of saying, in the United States. And there first I made my manhood's acquaintance with boys.
"Do you think," said dear Dr. Malone to me one day, "that my son Robert will be too young to enter college next August?" "How old will he be?" said I, and I was told. Then as Robert was at that moment just six months younger than I, who had already graduated, I said wisely, that I thought he would do, and Dr. Malone chuckled, I doubt not, as I did certainly, at the gravity of my answer. A nice set of boys I had. I had above me two of the most loyal and honorable of gentlemen, who screened me from all reproof for my blunders. My discipline was not of the best, but my purposes were; and I and the boys got along admirably.

It was the old schoolhouse. I believe I shall explain in another place, in this volume, that it stood where Parker's Hotel stands, and my room occupied the spot in space where you, Florence, and you, Theodora, dined with your aunt Dorcas last Wednesday before you took the cars for Andover,--the ladies' dining-room looking on what was then Cook's Court, and is now Chapman Place. Who Cook was I know not. The "Province Street" of to-day was then much more fitly called "Governor's Alley." For boys do not know that that minstrel-saloon so long known as "Ordway's," just now changed into Sargent's Hotel, was for a century, more or less, the official residence of the Governor of Massachusetts. It was the "Province House."