How To Buy a Winning RC Car Ebook

How To Buy a Winning RC Car
Category: Auto 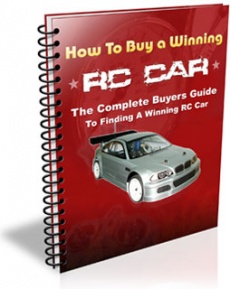 +$5
Title: How To Buy a Winning RC Car
Description:

Remote controlled car racing is a sport that has enjoyed popularity among car model enthusiasts of all ages for several decades, attracting both young and old. Malls featuring race tracks dedicated to RC racing were prevalent for a while, and now die hard hobbyists race each other in tracks of land set aside as racing strips for RCs.

Some RC enthusiasts prefer to buy pre assembled RC cars for their races, while others buy kits and pay the shops where they bought them to have them assembled professionally. The most personally rewarding thing for some RC hobbyists, however, is to purchase a kit and construct it themselves. For those of you who are new to the sport, here is a basic rundown on the major parts that make up an RC car.

Transmitter - this is a little handheld gadget used to control the car. It operates on a certain bandwidth and sends out radio signals to tell the car what to do (and hopefully keep it from crashing into stuff!). When buying a transmitter make sure that it's bandwidth doesn't run along the same wavelengths as any radio or TV stations in your neighborhood, or you might find your RC kissing pavement when your local station plays music that irritates your car.

Receiver - naturally, if the transmitter sends out commands, something has to receive it. That's what this little box is for. It picks up the signals from the transmitter and translates it into commands to the car itself, stuff like "Brakes! Noooow!". It's the brain of the RC, essentially.

Gearboxes - these translate the signals from the receiver into physical action that controls the steering, brakes, and motor of the car. Good gearboxes have to be sturdy, and have to have tough wiring to make sure they don't get disconnected from the receiver. They're your car's nervous system and muscles rolled into one.

Battery Pack/Fuel Source - depending on your RC's motor type, it will either be powered by a battery or by a nitro fuel type similar to real gasoline. The choice between the two becomes largely a matter of personal preference, because with proper tweaking, a battery operated motor can churn out power comparable to a nitro engine. If you're going with stock motors though, nitro engines put out more juice to make your car go go go! They're a bit tougher to maintain though. Anatomically speaking, this is your car's stomach.

Chassis and frame - like a real car, this is the shell that defines your RC's looks, as well as the framework that holds all the little parts of the car together. Fiberglass chassis are tough and light, making them ideal for racing, though for those of you who want more toughness metal composite chassis are also available for some RCs. On a human, this would be the bones and skin.