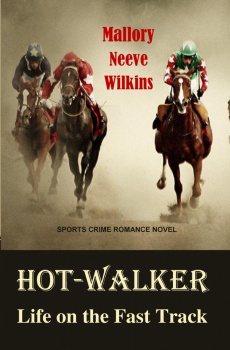 Sports Crime Romance Novel, Hot-Walker Life on the Fast Track. During the turbulent years of 1960s, the rise of a new generation of alternative lifestyles and greed occurred. At the end of the decade a murder
shocked Toronto community when Hot-Walker Frannie Harrison witnessed the killing of her fiance, an American draft dodger at Woodbine Racetrack.

Frannie Harrison, the youngest child of a wealthy but alcoholic and dysfunctional family, sets out to find her own life. Ultimately, she ends up in Yorkville Village, Toronto's hippie community, filled with drop-outs and losers, druggies and draft-dodgers. Young and innocent, she falls in love with an ambitious American who works at Woodbine Racetrack and convinces Frannie to take a job there. Suspecting that he is into drug dealing in a small way, she is by no means prepared to witness his violent murder, days before they are to be married.

Devastated, she grieves, stuggling with denial and complicated relationships before escaping to Europe, leaving her friends behind.

Unable to conquer the demons from living a life on the fast track, she travels until petitioned for trial. Frannie returns to Toronto to deal with the painful ordeal, a murder trial sufficating with courtroom drama that produces shocking testimonies.