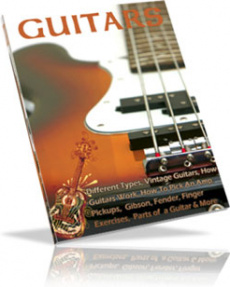 +$5
Title: GUITARS
Description:
Everything You've Ever Wanted To Know About... GUITARS

Everything You've Ever Wanted To Know About...
GUITARS

A Brief History of the Guitar
To say where a lute - or any of the other dozens of similar instruments - leaves off and the guitar begins is an impossible exercise. Guitar-like instruments have been uncovered in archaeological digs and documents as far back as Ancient Egypt and Babylonia almost 4,000 years ago.
But these bear only a general resemblance to our modern instrument. The length of the neck is shorter, the body smaller and the number of strings varies from four to eight or more. Some are strung in pairs and all have very different tunings. The string material wasnTt, of course, nylon or steel - both modern chemical compounds the ancients could not have produced.
The features of the modern guitar first start to come into view in Imperial Rome around 200 A.D. Rawhide soundboards have been replaced by wood by this time, though the sound hole is not a single large opening but several groups of small round holes.
But the back has been flattened and the top and back are now joined by two sides to form the body. The design would undergo little change for the next thousand years or more as the Dark Ages descended on Europe.
To what extent the modern guitar has its origins in Moorish influences is uncertain, since their presence in Spain caused such a cultural mixture. But make them there they did, and the sounds produced are strikingly similar to what you might find in an acoustic today.
By the time we reach the 16th century, things really begin to take shape. The tuning was different, and the number of strings still varied and were still made from gut, but the tone is very similar to a modern acoustic.
Prior to that, there are very few extant instruments to test that theory, but many from that period have survived. The sound is softer, the volume more muted, but the distinctive guitar TauraT is all there.
By the mid-l7th century the modern world is beginning to emerge. Guitars followed suit. Patronage from French, Italian and German nobility gave a boost to luthiers (guitar makers) all over Europe. It is a period of great experimentation with tunings, number and arrangement of strings and tonal quality from different woods. Some were much more than just musical instruments, becoming truly fine works of art. Many had elements made from ivory, tortoise shell, gold, silver and other fineries.
With the coming of the Age of Enlightenment in the late 18th century, the guitar was a respectable instrument attracting the attention of the finest composers. The six string emerges as a dominant type, most likely originating in Italy. Some twelve string types were just sixstrings in double courses.
As the 19th century dawns, guitar making flowers alongside the Industrial Revolution. Such outstanding names as Schubert and Paganini compose not just for the guitar, but on the guitar as a proxy for other instruments. But in the latter part of the century the TfinalT design emerges, with the work of Tarrega and later, Jurado.
It is to the latter that goes the credit for bringing the guitar into the form we see it today, both inside and out. He developed an innovative strut design, enlarged the neck and body and made other changes. The guitar needed only a change of string material to be the instrument we recognize today.