People seldom improve when they have no other model but themselves.
Oliver Goldsmith
Advanced search 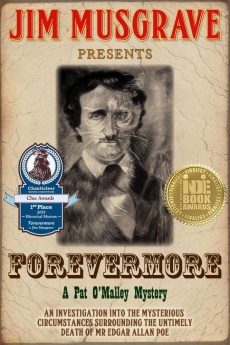 Join Detective Patrick James O'Malley as he returns from the Civil War to live in Poe Cottage in the Bronx.  He is visited by the ghost of Poe one night, and he also finds a strange note on the bed of Poe's deceased young wife, Elizabeth.  The note contains information that makes Poe believe that his former boss was murdered rather than accepting he died of natural causes in Baltimore.

This is a powerful mystery in three acts, and it established O'Malley as one of the most intelligent and interesting private detectives in crime fiction.

O'Malley must solve the murder of his former mentor, Edgar Allan Poe, and in this short mystery, he is pursued by one of the most heinous serial killers in 19th Century New York City.  This is the first in the trilogy (available on most major bookstore online sites).